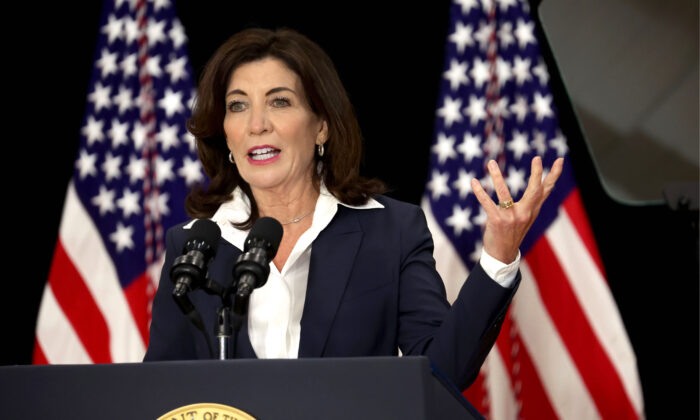 New York Gov. Kathy Hochul speaks to guests during an event with President Joe Biden and several family members of victims of the Tops market shooting at the Delavan Grider Community Center in Buffalo, N.Y., on May 17, 2022. (Scott Olson/Getty Images)
Constitutional Rights

New York law enforcement officials are condemning sweeping new laws on gun ownership that were rushed through the state Legislature and signed into law in response to the U.S. Supreme Court striking down the state’s tough concealed carry gun permitting system.

The officials say the new legislation will be difficult to enforce and may be unconstitutional.

“We do not support punitive licensing requirements that aim only to restrain and punish law-abiding citizens who wish to exercise their Second Amendment rights,” the New York State Sheriffs’ Association said in a statement available on its website.

The Supreme Court voted 6–3 on June 23 to strike down New York state’s concealed carry gun permitting system on constitutional grounds, recognizing for the first time a constitutional right to carry firearms in public for self-defense.

The decision undermines concealed carry laws in states that require permit applicants to demonstrate a special self-defense-related need to carry in public.

Maryland Gov. Larry Hogan, a Republican, announced on July 5 that his state would comply with the ruling because Maryland’s concealed carry permitting law is “virtually indistinguishable” from New York’s.

The New York Legislature went in the opposite direction after the ruling, speeding through legislation cracking down on gun ownership.

The sheriffs’ association acknowledged that lawmakers had to take “some action … to fill the firearms licensing vacuum created when the Supreme Court struck down New York’s unconstitutional restrictions on our citizens’ right to keep and bear arms.”

“But it did not need to be thoughtless, reactionary action, just to make a political statement,” the group said.

The Legislature passed “sweeping new criminal justice laws that affect the rights of millions of New York citizens, and which impose burdensome new duties on local government officials, without any consultation with the people who will be responsible for carrying out the provisions of those new laws. This has become a habit with the Legislature and has resulted in other criminal justice disasters such as New York’s so-called Bail Reform Law.”

When the Legislature in Albany convened for a special session after the Supreme Court ruling, it said it needed to craft measures complying with it.

Critics say the new Concealed Carry Improvement Act, which New York Gov. Kathy Hochul, a Democrat, hurriedly signed into law, openly defies the Supreme Court ruling in June in New York State Rifle and Pistol Association v. Bruen, which requires the loosening of some concealed carry restrictions. The new state law, which is certain to be challenged in court, is scheduled to take effect on Sept. 1.

At the signing ceremony, Hochul denounced the court ruling as “a reckless decision removing century-old limitations on who is allowed to carry concealed weapons in our state—senselessly sending us backward and putting the safety of our residents in jeopardy.”

She said the new law was drafted to “strengthen our gun laws and bolster restrictions on concealed carry weapons.”

The statute requires carry permit applicants to show “good moral character,” navigate a gun safety course, and surrender information from their social media accounts for background checks. The latter requirement, which may run afoul of First Amendment free speech protections, has been compared with China’s intrusive social credit system because it may lead to prospective applicants being denied access to firearms based on their political opinions.

Even before the law was passed, New York had recently enacted a raft of other measures regulating guns.

On June 6, Hochul signed a package of 10 bills into law in response to the racially motivated May 14 mass shooting at a supermarket in a predominantly black neighborhood in Buffalo that left 10 people dead.

The various measures raise the age to purchase semiautomatic rifles from 18 to 21; ban the purchase of body vests by non-police officers; expand the reach of red flag laws to allow health care practitioners to report individuals and require police and prosecutors to do the same; create a new crime of selling firearms that cannot be micro-stamped (an ammunition-marking technique that theoretically makes it possible to link bullets and casings to specific guns); and creates a new Task Force on Social Media and Violent Extremism in the state attorney general’s office.

On May 18, Hochul signed Executive Order 19 strengthening the state’s red flag laws. She directed the New York State Police to make sure officers are trained in filing so-called extreme risk protection orders (ERPOs) to confiscate firearms from private citizens. The same day, she also signed Executive Order 18, creating an Office of Counterterrorism to monitor private individuals’ social media posts so it may “intervene in the radicalization process.” The order directs state police to increase their monitoring of social media to identify potentially violent extremists.

The latest gun law has resulted in mass confusion, according to a report by Utica television station WKTV.

Judges in each county will “have to review three years of social media of each applicant and have to meet in person with each applicant,” said Dan Sullivan, Oneida County’s assistant pistol licensing officer.

“It’s not a possible task,” he added.

Lyon is representing plaintiffs in two new lawsuits: one challenges the ban on concealed carry in Washington, D.C.’s crime-ridden public transit system; the other takes on D.C.’s ammunition limits for concealed carriers.

“It is unfortunate that New York is harkening back to the days of ‘Massive Resistance’ that was adopted following the Brown decision back in the 1950s in Virginia and some of the other southern states.”

Lyon was referring to Brown v. Board of Education, the 1954 Supreme Court ruling that struck down state laws enforcing racial segregation in public schools.

“Massive Resistance” is a policy Virginia adopted in 1956 that was advocated by the late U.S. Sen. Harry F. Byrd Sr., a Virginia Democrat who coined the phrase. Schools were shut down in the state to prevent desegregation. The policy succeeded in delaying the desegregation of Virginia’s schools for a decade and increased racial tensions.

“I would have thought that New York would have learned from Virginia and Arkansas and the rest of the states that, as you would say, thumbing your nose at the Supreme Court doesn’t get you anywhere in the long run,” Lyon told The Epoch Times in an interview.