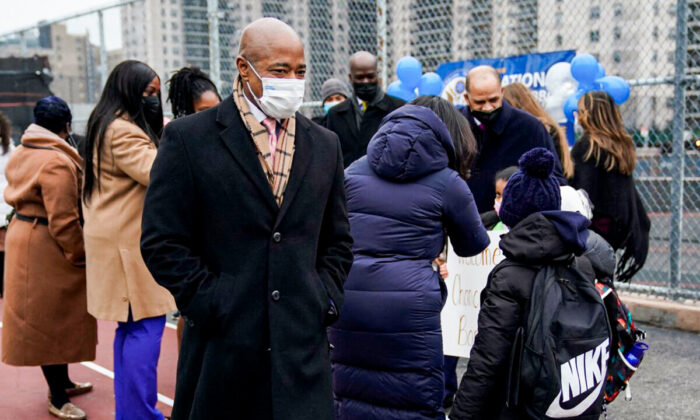 Despite thousands of U.S. schools, including in some major cities, delaying this week’s scheduled return to classrooms and switching to remote learning amid rising COVID-19 cases, officials in New York are vowing to keep schools open.

“We are going to keep our schools open and ensure that our children are safe in a safe environment,” New York City Mayor Eric Adams, who took office over the weekend, told reporters after visiting an elementary school in the Bronx on Monday.

New York City schools, the largest district in the country, reopened as planned on Monday but with more testing for its nearly 1 million students. Instead of quarantining an entire classroom if one person tests positive, all students in the class will be given rapid at-home tests to use over the next seven days.

Adams said the safest place for children was in a school building.

“If you look last year and 2020, you witnessed that the transmission rate was less than one percent inside a school. In the household, it was over 15 percent,” said Adams.

New York governor Kathy Hochul echoed Adam’s strategy, saying “My view is that every child you back in school, unless they’re testing positive.”

“The incidence of it being spread in schools certainly exists, but it’s minor compared to their other exposure. So in that sense, they are safer in a school setting than being out there playing with everybody else,” added Hochul

In New Jersey, most urban districts have implemented virtual classes to start the new year, including Newark, which has nearly 38,000 students.

Milwaukee’s public school system announced on Sunday that its more than 70,000 students would switch to virtual learning on Tuesday due to a rise in COVID-19 infections among staff members. Cleveland’s schools have also gone remote, while Detroit canceled classes through Wednesday.

The school disruptions, which left many parents scrambling to find child care, have added to a broadening sense of chaos in the first few days of 2022.

The Omicron variant appears to be more contagious than previous iterations, but data suggests it may be less virulent than Delta.

Some school systems are using testing to try to stave off further delays. In Washington, all staff and 51,000 public school students must upload a negative test result to the district’s website before coming to class on Wednesday. Parents can pick up rapid tests at their school or use their own.

Similar efforts are underway in California, which pledged to provide free home-test kits to all its 6 million K-12 public school students.