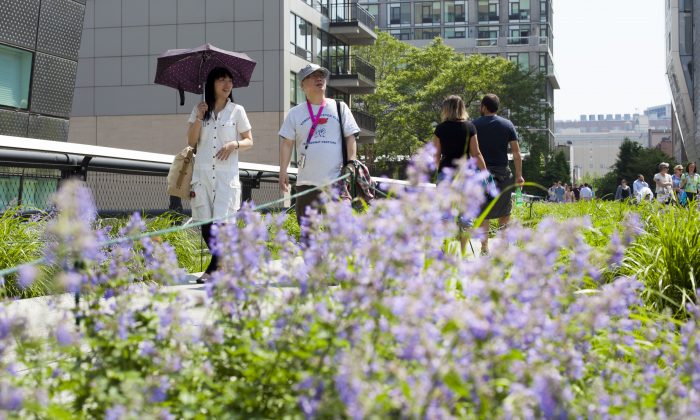 People enjoy a walk along the High Line on a sunny afternoon in New York, May 29, 2013. (Samira Bouaou/The Epoch Times)
New York

It’s a good day for New York City. It not only has one of the world’s most iconic skyscrapers, but statistics released Wednesday also prove that the city also has the second best U.S park , and is the most competitive city on the globe.

What does it mean to be the most competitive city?

New Yorkers are not only competitive when speed walking down the streets, the city is also most competitive economically.

A study by the Economist Intelligence Unit ranked 120 cities around the world on criteria such as their ability to attract investments, workers, tourists.

It found that New York City will remain number one for at least 12 years.

New York will remain number one, and London will remain as the world’s second most competitive city until 2025.

Yet some quickly developing cities such as Taipei can be a potential competitor. Taipei is estimated to move up from 25th to 11th place by 2025.

The nonprofit organization found that Minneapolis was number one, which received a “5 park bench” score.

San Francisco fell from first to third, and New York improved from third to second place this year.

New York also did well in terms of access; 96 percent of residents are living within a 10-minute walk from a park.

“The latest ParkScore rankings are further evidence that New York City is the ‘Queen of Green,'” said Mayor Michael Bloomberg. “Our sustained investment in building great parks and maintaining them well pays off for City residents and visitors alike.”

“You can’t have a great city without great parks,” said Adrian Benepe, Director of City Park Development for The Trust for Public Land.