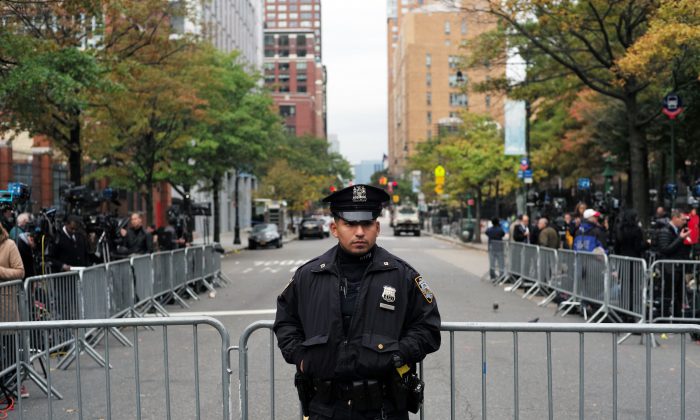 A police officer secures an area near the site of a terror attack in New York on November 1, 2017. (Jewel Samad/AFP/Getty Images)
US News

A New York man has pleaded guilty to trying to help ISIS by traveling to Turkey with the goal of entering Syria and fighting for the militant group, federal prosecutors announced on Tuesday.

“The plea gives the court wide sentencing latitude and we trust the judge to be fair,” Jeremy Schwartz, Nagi’s lawyer, said in an email. “Mr. Nagi never engaged in violence and he does not wish harm to the United States.”

RT #FightExtremism "Arafat Nagi used Twitter to pledge his allegiance to ISIS leader Abu Bakr al-Baghdadi, and regularly tweeted about his goal to fight with ISIS in Syria. https://t.co/UXSvDVBbxu"

Nagi, of Lackawanna, New York, is scheduled to be sentenced by Arcara on May 7. He faces a maximum sentence of 15 years in prison, according to prosecutors.

Nagi, who was born in the United States to Yemeni parents, was arrested in July 2015 and charged with attempting to materially aid ISIS. Prosecutors said he pledging allegiance to the group and traveled to Turkey twice, in October 2012 and July 2014, to meet ISIS supporters.

Prosecutors said at the time that the arrest followed a Federal Bureau of Investigation probe prompted by a tip from one of Nagi’s neighbors in Lackawanna, which is located in upstate New York near Buffalo.

The neighbor told the FBI that Nagi regularly argued with local residents about his beliefs, which included support of ISIS, and was planning to travel to Turkey again, according to prosecutors.

Lackawanna drew national attention as the home of the so-called “Lackawanna Six,” a group of young American men of Yemeni descent who pleaded guilty to providing material support for terrorism by attending al Qaeda’s al Farouk training camp in Afghanistan in early 2001.

Multiple people are currently facing charges of aiding ISIS in New York federal courts, including Sayfullo Saipov, accused of killing eight people by driving a truck into a New York bicycle path, and Akayed Ullah, accused of trying to detonate a homemade bomb in a Manhattan subway station.