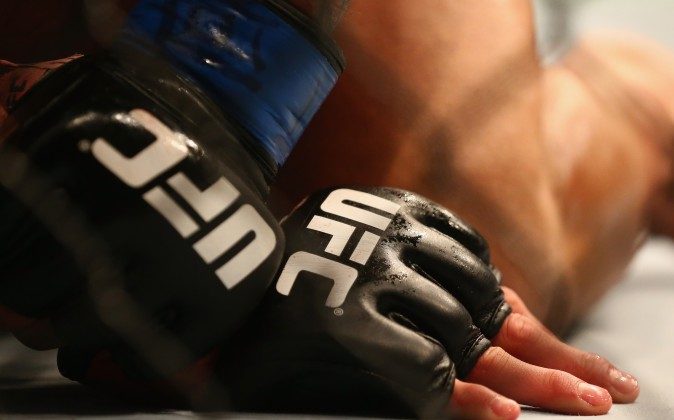 A detail of gloves worn by UFC fighters Anthony Pettis and Rafael dos Anjos in the Lightweight Title bout during the UFC 185 event at American Airlines Center on March 14, 2015 in Dallas, Texas. (Ronald Martinez/Getty Images)
Sports

One big step for New York State and one giant step for the sport of mixed martial arts (MMA).

For nearly two decades, New York has been the only state holding the United States back from the nationwide legalization of MMA-style fighting.

On March 21, the State Assembly passed its legalization with a bipartisan vote of 113-25.

From the State Assembly’s hands, the bill will move to Governor Andrew Cuomo, who in the past has been forward about his support of MMA.

Assuming Gov. Cuomo will sign it quite rapidly, the sport will see legality after 120 days. The Ultimate Fighting Championship (UFC) is already planning its debut in November at Madison Square Garden.

UFC Chairman and CEO Lorenzo Fertitta expressed excitement over the State Assembly’s passage of Bill A.2604-C, which was sponsored by Assembly Majority Leader Joseph Morelle and 72 other Assembly members. Fertitta released a statement the same day:

“This has been a long time coming and on behalf of our New York UFC athletes and fans, I want to offer heartfelt thanks to Speaker Heastie, Majority Leader Morelle and all the Members of the Assembly – Democrats and Republicans—who voted for this bill.

“Joe Morelle has worked tirelessly to educate his colleagues and build support for legalizing professional MMA and regulating both professional and amateur MMA. He has worked closely with Senator Joe Griffo, who has shepherded this effort in the Senate, where the bill has passed with strong bipartisan support for the last seven years, and MMA fans owe both a huge debt of gratitude.

“New York’s amazing arenas—upstate and downstate—have worked with us to advocate passage of this bill. So, too, have restaurants, hotels, businesses and others who recognize the economic value professional MMA can bring to New York,” Fertitta said. “Our athletes have been extraordinary. More than 20 have been to Albany to help educate legislators about the fastest growing sport in the world. And our fans have been phenomenal. Through letters and phone calls, rallies and social media, New York’s MMA and UFC fans have lent their voices of support. It took a while, but their voices have been heard.

“While there are still additional steps that have to occur before professional MMA becomes a reality in New York, I want to assure our fans that if Governor Cuomo signs the bill into law and the State Athletic Commission puts in place the appropriate regulations, we look forward to hosting our first New York event in the world’s most famous arena – Madison Square Garden, home to so many epic sporting events throughout the decades,” Fertitta said. “We also look forward to scheduling events in Buffalo, Rochester, Syracuse, Utica, Albany, and Brooklyn. We are excited.”

UFC has promised to hold at least four events per year in New York for the first three years after MMA is legalized and regulated in the state.

On Twitter, pros and fans alike shared their excitement for the legalization of MMA in New York.

I’ve waited a long time for today and couldn’t be more excited to have MMA legal in my hometown of New York!! pic.twitter.com/uoxIpPbcQ4

Thank You NY State Legislature! We are one step closer to making MMA a reality in New York! #MMA4NY

This is a major step not only as a professional fighter but as a business owner and provider for my family! #MMA4NY #ufc @ufc #limma

Glad #mma has been made legal in Ny. Bet @danawhite is happy and rubbing his hands together. Great result! MSG here they come #ufc