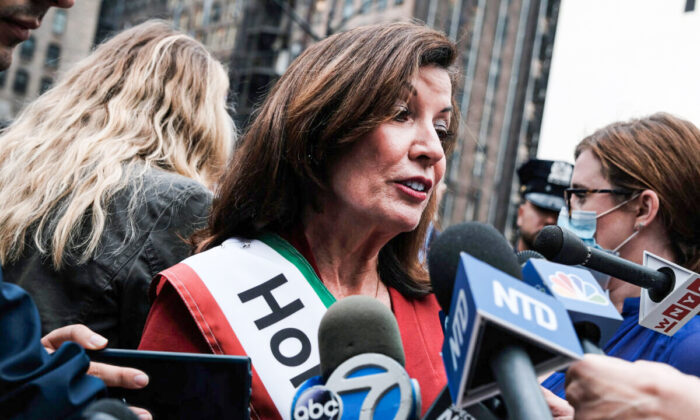 New York Gov. Kathy Hochul announced a new COVID-19 vaccine incentive program for children aged 5 to 11, offering them an opportunity to get a college scholarship worth about $100,000.

The incentive program, dubbed “Vaccinate. Educate. Graduate,” expands on former Gov. Andrew Cuomo’s “Get a Shot to Make Your Future” campaign for older children and teenagers. It calls for any children in the 5 to 11 age group who received at least their first dose of the COVID-19 vaccine to enter a pool from which the state will draw 50 winners for the scholarship.

According to the governor’s office, the scholarship will cover the full cost of in-state tuition, room and board, and other costs at any New York state or city university. Students living on campus will receive a higher room and board allowance than commuter students. If housing is not available for students on campus, they will receive the same allowance as students living on campus.

An average in-state student living on campus at the State University of New York spends about $27,100 for one academic year, according to the university’s office of student financial aid services.

“Tuition, fees, room and board, the whole nine yards,” Hochul said. “You’ll have extra money now. You don’t have to be saving for college. So everybody with children needs to do this.”

Hochul said 65 percent of New York’s 800 public school districts indicated that they will host vaccination sites after the U.S. Centers for Disease Control and Prevention (CDC) officially recommended Pfizer’s vaccine for children aged 5 to 11. The state has already brought more than 700,000 children-size doses, including 300,000 for New York City.

In New York City, over 4,500 students in the 5 to 11 age group got vaccinated on the first day of the citywide in-school vaccine drive, Mayor Bill de Blasio said. As of Nov. 9, about 25,000 children across the city had received the vaccination since the CDC recommendation.

“We see that parents are coming out, getting their kids vaccinated,” de Blasio said. “We expect this to grow a lot in the coming days”

A similar incentive is being offered in Minnesota, where the “Kids Deserve a Shot” program gives 12- to 17-year-olds who are fully vaccinated a chance at winning one of five $100,000 scholarships to attend any public or private nonprofit higher education institution in the state. The five drawings will be conducted weekly starting on Nov. 15.

“We’re launching this program to help reward teens for doing their part by getting fully vaccinated and keeping our schools, community, and state safe,” Gov. Tim Walz said last month announcing the initiative.