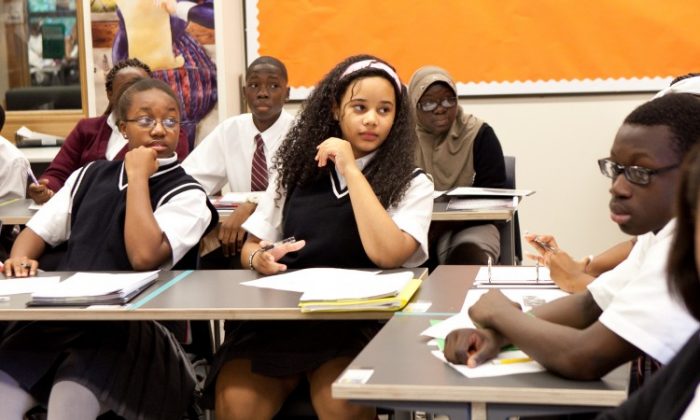 Students in a classroom at the Harlem Village Academy High School are seen here in this file photo. (Amal Chen/The Epoch Times)
US

NEW YORK—High school progress reports for the 2011–2012 school year are now available for parents, teachers, and other interested parties.

Ninety-five percent of high schools in the city either have the same grade as last year or have only shifted one grade up or down, according to the city’s Department of Education.

The grades this year include a new section for college readiness, a much discussed topic. Almost 80 percent of students that enter one of the City University of New York’s six community colleges need remedial classes, or classes that will elevate them to college classes.

The new section is worth 10 percent of a school’s score. School environment (15 percent), student performance (20 percent), and student progress (55 percent) count for the rest of the score.

Multiple ways of measuring schools are included in each of these categories, such as student attendance, parent surveys, and comparing the school’s results to about 40 other schools that serve similar student populations.

Parents, eager to pick the right high school for their children, consider the school’s progress report grade when choosing, according to Tamara Enoe, a junior at Gotham Professional Arts Academy in Bedford-Stuyvesant, Brooklyn. The school got an F last year and a B this year.

Enoe told Schoolbook that she was working at the school’s table at a recent high-school fair when a mother came over and looked at the table, then discovered Gotham’s F grade in the high-school directory.

“She pulled her son — she said ‘No, let’s go, let’s go. You’re not applying here,'” recalled Enoe, according to the media.

Problems with the progress reports include, according to critics, an overreliance on test scores (they’re used to account for the student progress portion, 55 percent of the grade).

Parents looking into schools should consider the report grade but also look into other aspects of schools, according to Judy Baum of InsideSchools, an independent analysis website of the New School.

“I can’t stress this enough—there is no substitute for seeing the school yourself,” she said in an online post answering a question from a parent about progress report grades. “You have already done research, now take advantage of open houses and school tours, or at the very least, stand outside at the end of the day and chat with the parents or caregivers while waiting for the kids.”

The progress reports do help schools identify what they aren’t doing well so they can make progress in those areas, according to Darryl White, principal of Bronx Collegiate Academy.

“What I do appreciate is that it informs you of what your focus should be in the next year,” White told Gotham Schools. White introduced Advanced Placement courses for the first time after only 2 percent of the students at the academy were deemed college ready, according to the city’s metrics. After receiving a B grade last year the school received an A this year.