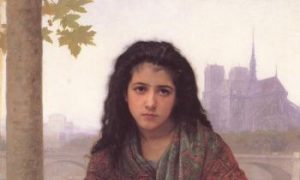 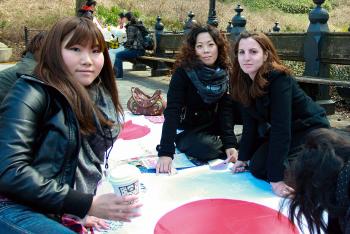 HAND-IN-HAND: Volunteers for the Hand-in-Hand Project for Japan collect funds for earthquake relief, and offer New Yorkers strolling through Central Park a chance to sign a Japanese flag with a message of hope to be sent to the devastated region. (Tara MacIsaac/The Epoch Times)
US

By Tara MacIsaac
Print
NEW YORK—As Japan suffers the terrible aftermath of an earthquake that shook the nation on March 11, New Yorkers reach out a helping hand.

Countless benefits and creative ways to raise money have swept the city over the last few weeks. Politicians, bakers, fashion designers, and New Yorkers of every walk of life have put their skills and influence to good use in a compassionate and monumental effort.

Citizens can also donate to the mayor's fund online , choosing the earthquake and tsunami relief option.

Noda, who was in Japan during the earthquake, but now stands at Grand Central Station to collect money for the Japanese American Association, is warmed by New Yorkers' sympathy.

“Many New Yorkers worry about Japan and [are] supporting us. They say to us 'God bless you,' and give us moral support,” said Noda.

Support has come in diverse forms from this diverse city.

Fashion Girls for Japan united 104 designers, putting together 91 racks of clothing plus accessories. The clothes were sold at The Bowery Hotel on April 2 and 3 at 50 percent of retail prices, with 100 percent of the proceeds going to Japan. Sales totaled $270,000.

New York's bakeries, delis, and fine-dining hot spots banded together to cook up some support. From March 23 to March 30, 61 restaurants across the city donated up to five percent of their sales.

Imagining himself in their shoes, business freelance writer Jason Kelly started up a campaign to send new socks to many Japanese who fled their homes barefoot, or whose feet have been wet and cold in a disaster zone. Many Japanese have requested socks, an article often overlooked in relief supplies.

“All human beings are comforted by a fresh, clean pair of socks,” writes Kelly. Along with each pair of socks, New Yorkers are sending messages of hope and encouragement.