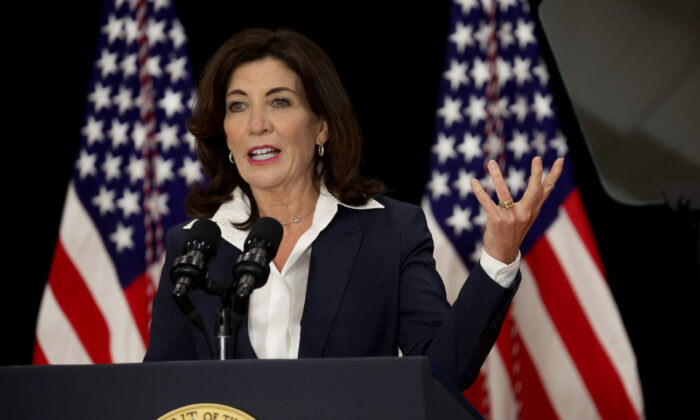 New York Governor Kathy Hochul speaks to guests during an event with President Joe Biden and several family members of victims of the Tops market shooting at the Delavan Grider Community Center in Buffalo, New York, on May 17, 2022. (Scott Olson/Getty Images)
NY Politics

“The women of New York will never be subjected to government mandated pregnancies,” Hochul said in a press conference, standing beside state Senate Majority Leader Andrea Stewart-Cousins, Assembly Speaker Carl Heastie, and various abortion providers and pro-abortion activists. “Today, we are taking action to protect our service providers from the retaliatory actions of anti-abortion states and ensure that New York will always be a safe harbor for those seeking reproductive healthcare.”

The legislative package will allow abortion providers to file complaints against anyone who sues or brings charges against them and will prohibit state courts from cooperating with out-of-state civil and criminal investigations into abortion providers.

Under the 1973 decision in Roe v. Wade, all 50 states—including more than two dozen states with full bans on any abortion—have been required to allow the controversial procedure through at least the first trimester of pregnancy under the so-called “viability standard.”

Republicans and pro-life activists have long criticized the decision as an infringement on states’ rights and have worked diligently to have the case overturned.

A recently leaked Supreme Court draft opinion pointed to the conservative majority overturning the 1973 decision. Twenty-six states may restrict or ban the practice once there is a final ruling, which is expected shortly.

Emotions are running high in anticipation of the ruling, with protests planned across the nation and reported acts of vandalism against faith-based pregnancy resource centers.

According to the most recently available data from the Guttmacher Institute, a pro-abortion research and policy organization, approximately 862,320 abortions were performed in the United States in 2017, out of which 105,380 were performed in New York. There were 252 abortion facilities in the state in 2017.

In 2019, there were 78,448 abortions performed in New York, based on data from the Centers for Disease Control and Prevention.

About 26 percent of pregnancies in New York ended in abortion during 2019, without taking miscarriages into account. Almost 9 percent of all abortions that took place in the state were performed on out-of-state residents.

Masooma Haq and Steve Lance contributed to this report.