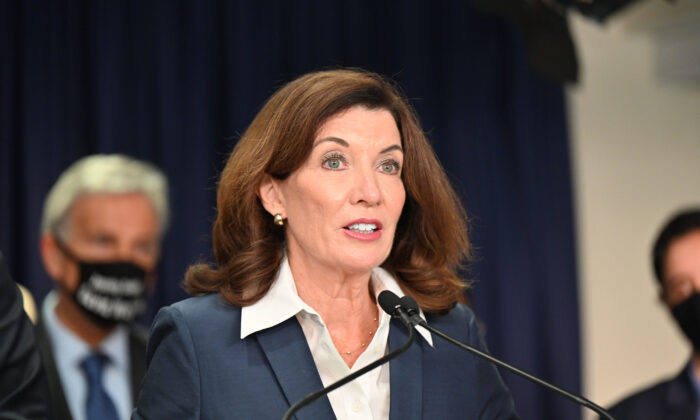 New York Gov. Kathy Hochul speaks at a signing ceremony of the “Less Is More” act, in New York, on Sept. 17, 2021. (Kevin P. Coughlin/Office of the Governor)
Regional News

Gov. Kathy Hochul announced Friday masks will be required in all indoor public places and venues unless those businesses mandate a COVID-19 vaccine requirement.

“We are entering a time of uncertainty,” Hochul, a Democrat, said Friday morning during a news conference in New York City. “We can either plateau here or our cases can escalate beyond control. We are heading in an upward direction that I find is no longer sustainable.”

Hochul’s measure is effective starting Dec. 13, 2021, until Jan. 15, 2022, and the state will re-evaluate the order based on the number of COVID-19 cases and hospitalizations.

“I have warned for weeks that additional steps could be necessary, and now we are at that point based upon three metrics: Increasing cases, reduced hospital capacity, and insufficient vaccination rates in certain areas,” the governor said in a statement.

Noncompliant businesses could be subject to criminal and civil penalties with a maximum fine of $1,000 per violation, which will be enforced by local health departments.

According to the New York state data, the state’s weekly seven-day case rate and hospitalization numbers have spiked by 43 percent and 29 percent, respectively, since Thanksgiving. Hochul on Friday said that about 80 percent of New York residents are fully vaccinated for COVID-19.

Both Hochul and Dr. Mary Bassett, in the statement, said masking measures would be needed to deal with the Omicron variant, which has been confirmed in New York state since it was first named in late November.

No deaths have been associated with the Omicron variant anywhere in the world, including the U.S. Federal health officials and authorities in other countries have signaled that early data suggests Omicron is a milder variant than the Delta strain.

“The disease is mild,” Walensky told The Associated Press this week, referring to the Omicron variant symtpoms. Most symptoms include cough, congestion, and fatigue, she said.

“What we generally know is the more mutations a variant has, the higher level you need your immunity to be … We want to make sure we bolster everybody’s immunity. And that’s really what motivated the decision to expand our guidance,” Walensky said.

Johnson announced a so-called “plan B” measures for England over the Omicron variant. That includes new work-from-home measures, the extension of a mask mandate, COVID-19 vaccine passports being required for certain businesses, and more regulations.

Despite the rising concern about Omicron, Bassett noted that the Delta variant accounts for the high numbers of hospitalizations and high case rates.