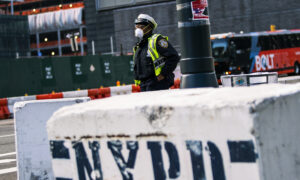 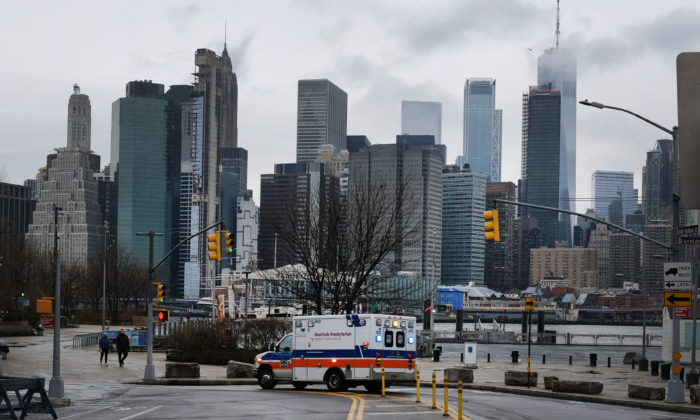 An ambulance pauses in Brooklyn while lower Manhattan looms in the background, in New York City on March 28, 2020. (Spencer Platt/Getty Images)
AMERICA

New York Gov. Andrew Cuomo on March 29 extended by two weeks a mandatory stay-at-home order for New York workers and reported 243 new CCP virus deaths, the most in a 24-hour period, as the state continues to bear the brunt of the COVID-19 pandemic in the United States.

The stay-at-home order is in effect through April 15.

The state’s COVID-19 cases grew 14 percent to 59,513 on March 28, with New York City accounting for more than half of the infections. The pandemic claimed the lives of 965 people in the state since the first case was reported on March 1. Only two counties in the state have not reported any CCP virus infections.

[Editor’s note: Read why The Epoch Times has adopted the term Chinese Communist Party or CCP virus, instead of novel coronavirus.]

More than 8,503 people were hospitalized with the virus in the state as of March 28. In a 24-hour span, 846 patients were discharged from hospitals after recovering from the disease. The number of patients discharged has grown rapidly on a daily basis since March 23, when 150 patients left hospitals.

Cuomo announced the new numbers during his daily briefing on the state’s mass-scale response to the spread of the disease. The governor, who has long been concerned about hospitals becoming overwhelmed with COVID-19 patients, discussed plans to have private and public hospitals in New York City and the state at large work together to ease the burden on individual hot spots. He noted Elmhurst Hospital in the borough of Queens is particularly under stress.

The state is stockpiling medical supplies and working with the federal government to retrofit existing spaces as temporary hospitals. The 1,000-bed U.S. Navy hospital ship USNS Comfort is scheduled to arrive in New York harbor on March 30.

New York state has reached out to retirees and health care workers to volunteer to staff the additional beds. More than 76,000 people have already volunteered to tackle the pandemic in the state, according to Cuomo.

The surge in new confirmed CCP virus cases has coincided with a rapid increase in testing. The state tested more than 16,000 people on March 28 and 172,000 to date, the highest total in the nation.

Of the hospitalized patients, 2,037 are in intensive care. The state has no current shortage of ventilators or hospital beds.

In mid-March, the number of hospitalizations was doubling in the state every two days. Cuomo pointed out that the trend has slowed and is now doubling every six days, as of March 28.

The number of new intensive care unit admissions ticked up to 282 on March 28. Meanwhile, the number of patients being intubated, or put on a ventilator, dropped for the third straight day to 165. Intubated patients represent the most severe cases, with chances of survival dropping the longer the patient is on a ventilator, according to Cuomo.

The day before Cuomo’s announcement of the updated stay-at-home order, the Centers for Disease Control and Prevention issued a travel advisory for New York, New Jersey, and Connecticut, calling on residents of those states to refrain from any non-essential travel for two weeks. President Donald Trump had considered issuing a quarantine order for those states but changed his mind after discussions with the White House COVID-19 task force and the state governors.

“This is not a lockdown,” Cuomo said. “It’s a travel advisory to be implemented by the states.”

“It’s totally consistent with everything we’re doing, and I support what the president did.”

As the lives of most New Yorkers have been turned upside down by the unprecedented measures designed to stop the spread of the pandemic, the governor encouraged people to find some joy and look for a “silver lining” during a stressful time.

“You know what, with everything going on—family, we’re here, we’re together, we’re healthy—that’s 98 percent of it. So find ways to make a little joy,” Cuomo said. “This is New York. We are going to make it through this. We have made it through far greater things.

A 1,000-bed hospital retrofitted by the U.S. Army Corps of Engineers is on track to begin operating this week, Cuomo said. The facility will be put to use when it is needed. The governor has been operating on a projection that New York state may need up to 140,000 hospital beds at the apex of the pandemic’s spread. The corps is in the process of retrofitting similar hospitals at four other locations in New York City.

While the number of total cases in China remains a mystery amid an ongoing coverup by the communist regime, the United States has more confirmed cases than the hardest-hit nations in Europe, including Italy, Spain, and France.

So far, the disease has been less deadly in the United States than Europe, where more than 21,000 people have died amid the pandemic.