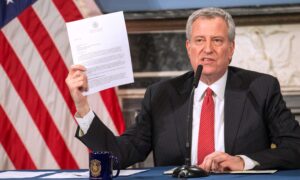 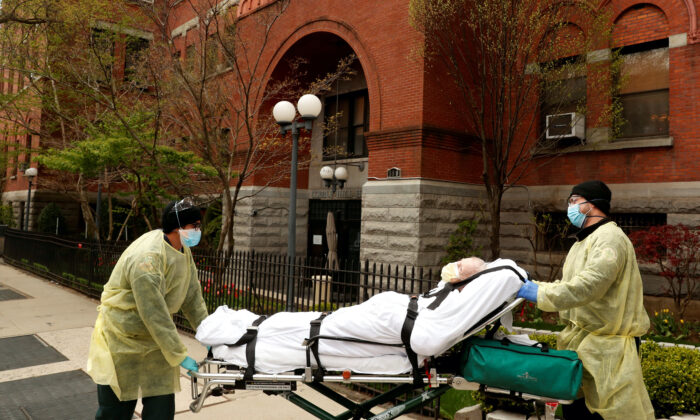 Emergency Medical Technicians (EMTs) wheel a man out of the Cobble Hill Health Center nursing home during an ongoing outbreak of the CCP virus in the Brooklyn borough of New York on April 17, 2020. (Lucas Jackson/Reuters)
AMERICA

New York state announced new protections on May 10 for residents of nursing homes, which have accounted for a large percentage of the almost 80,000 CCP virus deaths recorded across the country.

All nursing home staff must be tested twice a week for COVID-19, the disease caused by the virus, and hospitals may not discharge any COVID-19 patient to a nursing home until the patient tests negative, Governor Andrew Cuomo said. If a nursing home cannot provide proper care, the patient must be transferred to the state, which he said has ample available hospital beds.

“Our number one priority is protecting people in nursing homes,” Cuomo said. “It’s where it (COVID-19) feeds.”

Nursing homes around the country have restricted or banned visitors to try to keep their residents safe as the number of recorded CCP virus infections in the United States rises past 1.3 million.

While the elderly are most at risk from COVID-19, New York is also investigating up to 85 cases of children with a rare inflammatory syndrome believed to be linked to the virus. So far three children, who also tested positive for the CCP virus, have died in New York from the mysterious illness and two more deaths are under investigation, Cuomo said.

The syndrome shares symptoms with toxic shock and Kawasaki disease, which can include inflammation of the blood vessels and potentially fatal damage to the heart.

Despite much remaining unknown about the CCP virus and the failure so far to find any effective treatment or vaccine, nearly all 50 U.S. states have been taking steps to relax lockdown measures by this weekend.

While New York continues to see declines in key metrics—with hospitalizations on May 10 falling to their lowest since March 20—many states including Minnesota, Nebraska, Iowa, and Kansas are recording rising numbers of cases even as they move to reopen their economies.

In addition to the loss of life, Americans are facing a devastating economic toll underscored by government data released on Friday showing the U.S. unemployment rate rose to 14.7 percent last month, up from 3.5 percent in February, and shattering the post-World War II record of 10.8 percent set in November 1982.

The White House has started informal talks with Republicans and Democrats in Congress about next steps on CCP virus relief legislation, officials said on Sunday, but they stressed any new federal money would come with conditions.

The CCP virus has also penetrated the White House, where two staff members tested positive in recent days. As a result, three of the most senior officials guiding the U.S. response to the pandemic have gone into self-quarantine.

Anthony Fauci, a high-profile member of the White House CCP virus taskforce, is considered to be at relatively low risk based on the degree of his exposure. Also quarantining are Robert Redfield, director of the Centers for Disease Control and Prevention (CDC), and the commissioner of the Food and Drug Administration, Stephen Hahn.

Former President Barack Obama, who has largely kept out of the fray even as Trump has blamed him for problems with the country’s preparedness, on Friday called Trump’s handling of the pandemic an “absolute chaotic disaster” during a conference call with former members of his Democratic administration, according to a source.

White House spokeswoman Kayleigh McEnany said Trump’s response to the CCP virus “has been unprecedented” and has saved American lives.

By Maria Caspani and Rich McKay