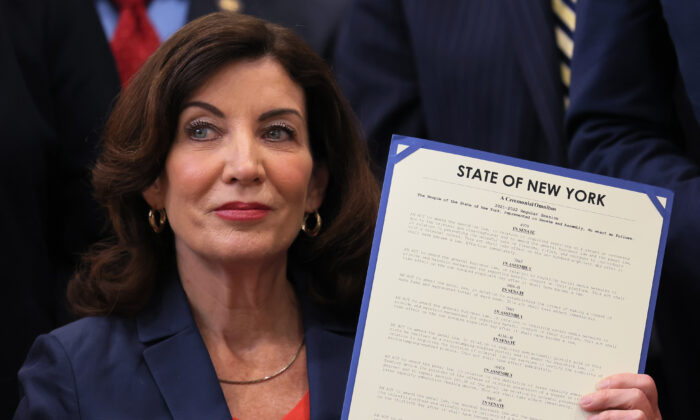 New York Gov. Kathy Hochul declared a state of disaster on Friday after samples of the polio virus were found in wastewater in three counties near New York City.

Samples of the virus were detected in wastewater obtained in Orange, Rockland, and Sullivan counties every month since April, indicating polio was present in the state before a case in Rockland County was detected in July. That case, according to officials at the time, was triggered by a vaccine that isn’t used in the United States any longer.

Hochul’s executive order came more than a month after an adult in Rockland County, north of New York City, was diagnosed with the disease in July—the first confirmed case of polio in the United States in nearly a decade. No other cases have been confirmed so far in the state or anywhere else.

The virus was also detected in wastewater samples obtained in New York City.

Under Hochul’s emergency declaration, it would expand the number of individuals who can administer polio vaccines. The state of emergency will remain in effect for one month.

Around one-in-every 100 people who get polio will develop a severe variant of the disease that includes paralysis. In the 20th century, mass vaccination campaigns were accompanied by images of children lined up in hospital rooms inside iron lungs.

“On polio, we simply cannot roll the dice,” state Health Commissioner Dr. Mary Bassett said in a statement. She also pushed for New Yorkers and their children to get vaccinated.

In mid-July, state and local officials confirmed the Rockland County case involved an unnamed person who was infected with a Type 2 vaccine-derived poliovirus that came from a type of vaccine that is taken orally. The vaccine is used in many other countries, but it was phased out in the United States in the year 2000.

“This is indicative of a transmission chain from an individual who received the oral polio vaccine (OPV), which is no longer authorized or administered in the U.S., where only the inactivated polio vaccine (IPV) has been given since 2000,” the state health department wrote in a July 21 statement. “

They noted that there is evidence the “virus may have originated in a location outside of the U.S. where OPV is administered, since revertant strains cannot emerge from inactivated vaccines.”