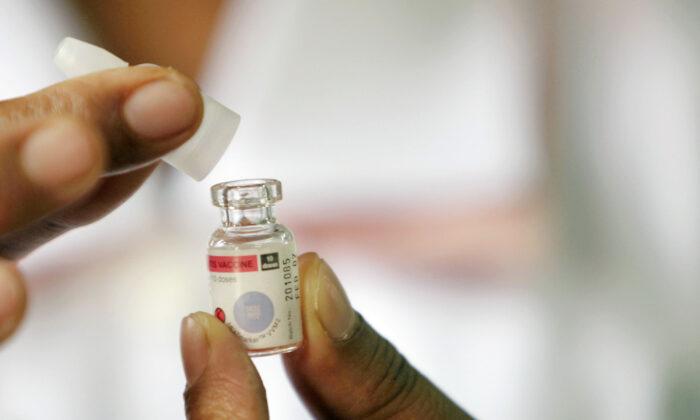 Polio vaccine is seen at an immunization post in Jakarta, Indonesia, on Aug. 30, 2005. (Dimas Ardian/Getty Images)
US News

The New York State Health Department on July 21 confirmed a polio case and called on health care providers to look for more infections.

Officials said a resident of Rockland County, located about an hour from New York City and next to the highly populous Westchester County, tested positive for the virus. The New York health agency said the U.S. Centers for Disease Control and Prevention (CDC) confirmed the infection.

The person is infected with a Type 2 vaccine-derived poliovirus, which would have come from a type of polio vaccine that’s taken orally and isn’t used in the United States but is used in many other countries. The United States stopped using the oral vaccine in 2000.

No cases of polio have originated in the United States since 1979, according to the CDC. Health officials in New York said the lone case originated outside the country, and it’s the first polio case reported in the state in nine years.

The Health Department statement didn’t provide the name, age, or ethnicity of the individual. The agency also didn’t say if the person recently traveled outside the country in recent days.

“This is indicative of a transmission chain from an individual who received the oral polio vaccine (OPV), which is no longer authorized or administered in the U.S., where only the inactivated polio vaccine (IPV) has been given since 2000,” the department said in a July 21 statement. “This suggests that the virus may have originated in a location outside of the U.S. where OPV is administered, since revertant strains cannot emerge from inactivated vaccines.”

Health officials told The Associated Press that the infection was transmitted from someone who got the oral vaccine and that the case involved a person who wasn’t vaccinated for polio. They told AP the infected person is a young man from Rockland County but provided no other details.

Health officials say polio is highly contagious and an individual can spread the virus even if they’re not sick. Symptoms include fatigue, fever, headache, stiffness, muscle pain, and vomiting, and they can appear up to 30 days later. Some cases can result in paralysis or death.

In the statement, local authorities pushed residents to get the polio vaccine if they haven’t already received it.

“Many of you may be too young to remember polio, but when I was growing up, this disease struck fear in families, including my own,” County Executive Ed Day said. “The fact that it is still around decades after the vaccine was created shows you just how relentless it is.”

Kimberly Thompson, a polio expert and president of nonprofit organization Kid Risk, told STAT News that it isn’t a surprise to see a vaccine-derived polio case appear. UK officials in June found vaccine-derived polioviruses in London’s sewage, according to the World Health Organization, which said it’s evidence of community transmission in the city.

“With Covid having disrupted immunization (even in the U.S.) and travel now having resumed and much more type 2 poliovirus transmission happening … it’s been only a matter of time before we’d have some detection of polioviruses in sewage, as happened recently in the U.K, or more tragically, a case,” Thompson told the outlet on July 21. “There’s just a lot more polio going around than there should be.”