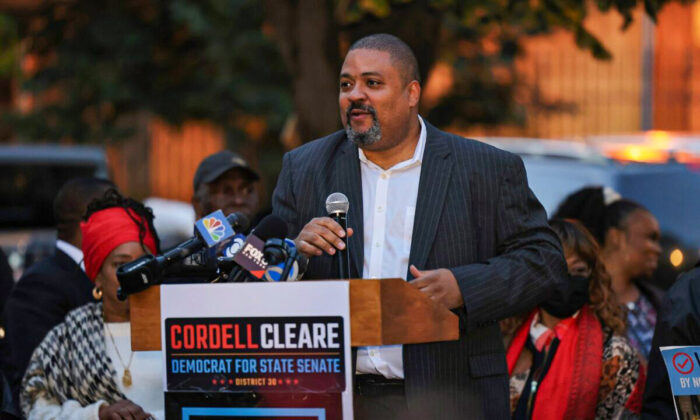 District attorney candidate Alvin Bragg speaks during a Get Out the Vote rally at A. Philip Randolph Square in Harlem in New York City on Nov. 1, 2021. (Michael M. Santiago/Getty Images)
Crime and Incidents

Manhattan District Attorney Alvin Bragg’s office on Tuesday dropped a murder charge against a bodega worker who was captured on camera stabbing a man who went behind the counter and attacked him.

“Following an investigation, the People have determined that we cannot prove beyond a reasonable doubt that the defendant was not justified in his use of deadly physical force,” said a motion filed Tuesday by Bragg’s office. “As such, the People will not be presenting the case to a Grand Jury and for the reasons provided in the attached memorandum, hereby move to dismiss the complaint.”

Jose Alba, 61, killed Austin Simon, 35, after Simon went behind the counter, shoved Alba, and stood over him as Alba sat against the wall. The footage showed Alba trying to get past Simon before he grabbed a knife and stabbed Simon several times.

Tuesday’s motion (pdf) filed by Bragg’s office noted that Alba could have argued that he acted in self-defense should the case go to trial.

The motion continued: “Simon’s conduct in entering the store’s small, private area, throwing Alba against the wall to a place he could not escape, and grabbing him by the collar could inspire deep fear in an older and shorter man as to what might be in store next.”

Alba might have assumed he was about to be robbed or attacked, the memo said, adding that Simon could have been committing a crime by cornering the bodega worker against the wall.

“It is a crime in New York to use physical force to intentionally restrict a person’s movements by moving him from one place to another or by confining him,” the motion stated. If Alba suspected “Simon was committing or attempting to commit a burglary of an occupied building, then Alba was permitted to use deadly physical force upon Simon if Alba reasonably believed it to be necessary to prevent or terminate the commission of the burglary.”

Alba supporters, including Francisco Marte, president and founder of the Bodega and Small Business Group, said that the videos “make it clear that it’s a case of self-defense.”

United Bodegas of America spokesman Fernando Mateo told the New York Post that Bragg “did the right thing” by dropping the charges. “He has proved people wrong.”