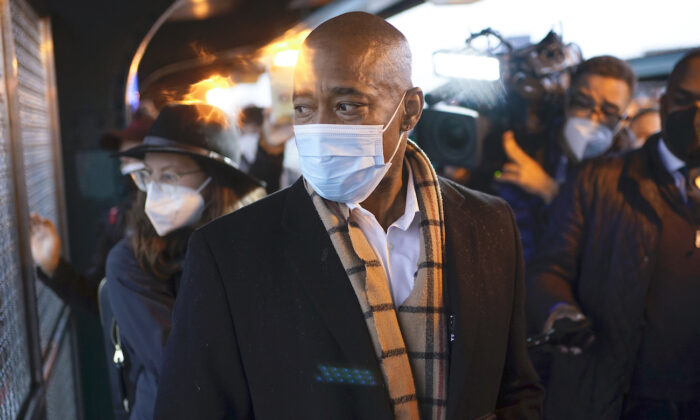 New York City Mayor Eric Adams waiting for the subway to City Hall on his first day in office in New York on Jan. 1, 2022. (AP Photo/Seth Wenig)
Businesses in COVID-19

Commercial property in New York has retained much of its value despite the economic turmoil of the past two years, according to an analysis of the city’s budget.

For the fiscal year 2020/2021, the NYC administration estimated the value of its commercial buildings to be $326 billion based on January 2020 numbers. For the fiscal year 2022/2023, the administration estimates the value to be at $301 billion, a decline of just 7.67 percent. As such, commercial properties in the latest fiscal year are expected to retain over 92 percent of their fiscal 2020/2021 value, according to a budget analysis by business publication Crain’s New York.

“It’s hard for me to believe with where occupancy rates are for office and hotels and retail that 92 percent is the correct number, but it’s also a question of where you’re looking at it,” Eli Weiss, principal of Joy Construction, told Crain’s as he expressed concerns about the retention of value. “As somebody who’s bullish on New York, I’d love to think we’d be there in a year from now.”

Compared to fiscal year 2021/2022 when the value of commercial properties in NYC was calculated to be around $269 billion, the current estimate is almost 12 percent higher. At $1.4 trillion, the administration’s numbers regarding the total value of properties in the city is higher by 2.1 percent when compared to pre-pandemic values.

Property prices and transactions were disrupted as social distancing rules and restrictions forced people, especially renters, to move back to their hometowns and continue working remotely, while offices and retail outlets were shut down.

NYC estimates the value of office properties to have fallen by 7 percent due to the lockdowns, from $172 billion to $160 billion. For hotel properties, it dropped 19.6 percent from $32.7 billion to $26.3 billion, while retail properties declined 11.9 percent in value to $56.2 billion from an earlier $63.8 billion.

According to the preliminary fiscal budget for 2023 (pdf), the administration expects to collect $30.89 billion in general property taxes, which is 5.06 percent higher than the $29.40 billion from the 2022 fiscal year. General property tax collection is expected to increase for the three years between fiscal 2024 and 2026.