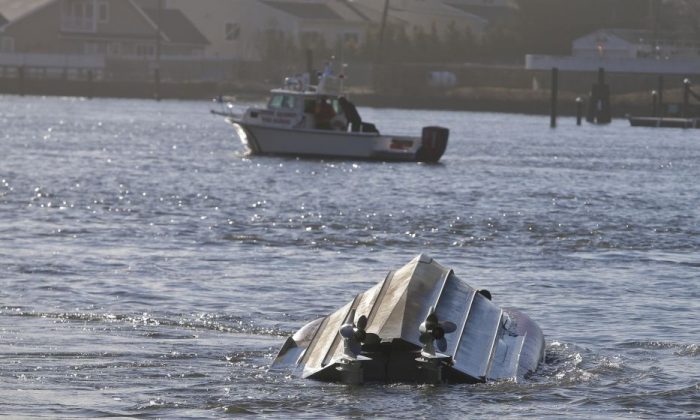 A U.S. Coast Guard vessel has capsized off Far Rockaway, New York, during a storm, according to the New York Daily News.

The 25-foot-long ship, Response Boat Small, was responding to a grounded fishing boat on Thursday. It was hit by 10- to 12-foot waves before it flipped over in the East Rockaway Inlet at around 5 a.m., officials said.

WHOA! A Coast Guard vessel has overturned trying to save a fishing vessel off the coast of Rockaway Beach in Queens. pic.twitter.com/eazVpSsVxS

The five crew members aboard the vessel swam to the shore near Beach 19th St, a spokesperson told the Daily News.

The Coast Guard ship eventually washed up on a nearby beach.

The ordeal began at around 2 a.m., when the Coast Guard got a distress call from a 76-foot-long fishing boat that had five to seven men on board, CNN reported.

After the Coast Guard ship flipped over and the men swam to shore, the Carolina Queen II, the vessel they went to go help, was stuck. The Coast Guard eventually saved the crew via a helicopter.

“Nothing about this really was routine,” FDNY Fire Chief George Healy told the Daily News. “This was a very treacherous operation.”

The waters off the Rockaways, located in the New York City borough of Queens, were under a gale warning on Wednesday night.

“FDNY had some marine resources coming and because of the conditions, we actually had to turn them back for their safety,” Healy said. “A U.S. Coast Guard rescue swimmer went in the water and he couldn’t even handle the conditions.”