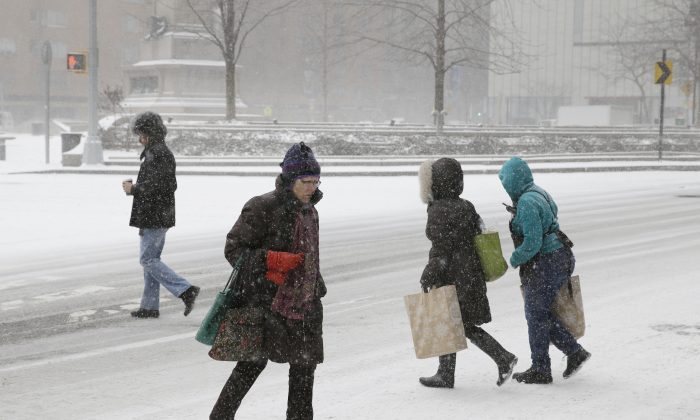 New Yorkers should prepare for snow before Thanksgiving, according to the latest weather forecast.

Up to four inches of snow is projected to drop on Wednesday, accompanied by northern winds of 15 to 20 miles per hour.

But it will almost certainly be snow on Wednesday night, with accumulation of four to six inches projected along with temperatures in the early 30s.

“Chance of snow near 100 percent,” the service said.

“Snow is forecast to fall steadily throughout the day, making for hazardous conditions on the roads and creating the possibility of delays at the region’s airports the day before Thanksgiving,” added NBC.

“The snow is expected to be heavy and wet, making it very difficult to shovel and creating the potential for localized power outages, especially north and west of the city.”

“If possible, avoid traveling on Wednesday from the mid-Atlantic to New England. The worst weather conditions will be from early Wednesday morning to early Wednesday evening in the DC and Philadelphia area,” said weather.com meteorologist Linda Lam.

“Farther north, conditions will deteriorate mid- to late-morning in New York and Boston, and the worst of the rain and snow will continue into Wednesday night (about 8 p.m. in New York and midnight in Boston).”

Thanksgiving Day will be cloudy and cold with temperatures with highs around 40 degrees Fahrenheit, and a slight chance of flurries.

Thursday night will have lows around 30 degrees and also a slight chance of flurries.

The good news is that Friday should be mostly sunny, although the temperature will still be cold with highs only in the mid 30s.

The temperature is expected to climb into the 40s on Saturday and the lower 50s on Sunday.