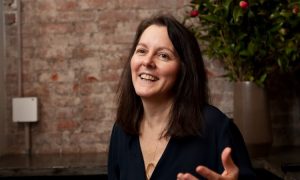 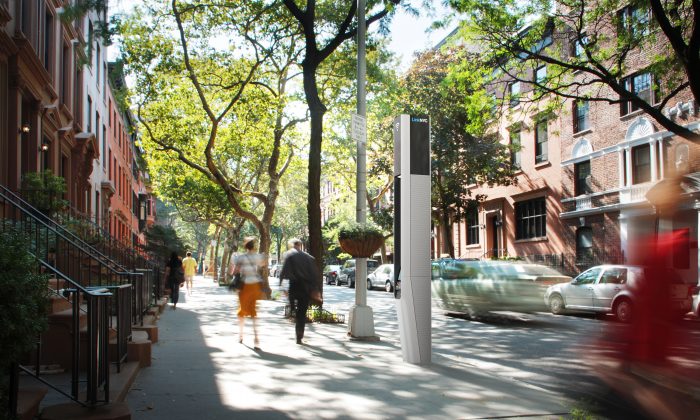 A concept photo of a WiFi kiosk in Brooklyn. (Courtesy of LinkNYC)
New York

Payphones Are a Dying Breed, Soon to be Replaced With Wi-Fi Hotspots

NEW YORK—By late next year, the first of the city’s aging payphone booths will be torn down and replaced with tall, thin, touchscreen kiosks that will provide free, high-speed, public Wi-Fi to all five boroughs.

The kiosks are the winning proposal chosen over 125 other submissions for the Reinvent Payphones design challenge hosted by the city.

The winning team is CityBridge, a consortium of tech companies, including Titan, Qualcomm Inc. and Comark. The project will be a public-private partnership, expected to generate $500 million in advertising revenue over the next 12 years for CityBridge and the city.

“It’s a once-in-a-lifetime opportunity to reimagine the payphone,” said Scott Goldsmith, chief commercial officer of Titan, and a managing member of CityBridge.

CityBridge pictures a complete overhaul of New York’s streets. People can access Wi-Fi to look for directions, have a videoconference, check email, and conduct business transactions, all at higher-than-ever-before speeds. The kiosks will provide service within a 150-foot radius.

It won’t be just any Wi-Fi, company representatives were quick to add at a press briefing Monday. LinkNYC, as the network of kiosks will be called, runs on gigabit Wi-Fi, which is significantly faster than what many New Yorkers are used to. Gigabit Wi-Fi is sometimes also called 5G Wi-Fi.

To put the speed into perspective, Colin O’Donnell, one of the founding members of Control Group, a NYC-based technology strategy and design firm, which is also a part of CityBridge, gave a simple example.

Uploading a thousand photos on a typical public Wi-Fi network would take over 20 minutes. On a home network, it’d take over four and a half minutes.

But on a gigabyte like what CityBridge is proposing?

Downloading a two-hour HD movie could take as little as 30 seconds, according to the press release.

The city will require that the 10,000 kiosks be installed in equal distribution throughout the five boroughs. At least 500 links will be installed by mid-2016.

At least three existing payphones will remain, as a remnant of technology from another era.

Maya Wiley, counsel to the mayor, and his go-to person on this issue, said she hopes that the other payphones can be donated for auction. She quipped, “Be looking to Christie’s for that.”

O’Donnell said that the new high-speed Wi-Fi opened up “thousands of uses” for New Yorkers and tourists alike. Citizens could vote through the public touchpoints, small businesses and artists could promote themselves, and students could call home. Passersby can also charge their phones.

For those who don’t have cellphones, the kiosks will also provide free calling services to anywhere in the fifty states, rendering payphones more obsolete by comparison.

Additionally, Kiosk users won’t have to worry about privacy issues.

Unlike the public free Wi-Fi network coming to many subway stations, managed by Transit Wireless, which is also an extended member of CityBridge, the Wi-Fi network for LinkNYC is encrypted. Anonymous user data won’t be given away, either.

The Franchise and Concession Review Committee will vote on the contract in early December, but the contract is expected to be approved. CityBridge has four years to build the first 4,000 links.

CityBridge spent six months designing and planning LinkNYC, which will cost $200 million to install. Titan, which currently manages a majority of the payphones in the city, is the biggest investor in the project.

In the past, the city has sometimes overstepped its reach and tangled with private enterprise, with some cases ending up in lawsuits.

But despite the possibility of being sued, CityBridge representatives said they were prepared and had a legally sound argument.

“It’ll set the standard—open data, inside driven advertising,” said O’Donnell, referring to the digital displays to be incorporated inside the kiosks. “It could be the new model for 21st century urban infrastructure.”

And another change from the citywide dirt-ridden payphones that are often in disrepair: one thing that won’t plague the kiosks is graffiti.

“We’ll have crews to clean them twice a week, up from twice a month,” said Nick Sbordone, spokesman for the Department of Information Technology and Telecommunications.