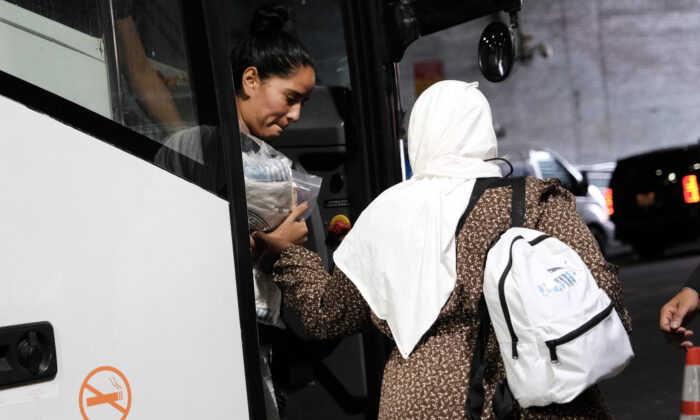 New York City’s shelter system is close to being overwhelmed by the continued influx of illegal immigrants from Texas, the city’s mayor said on Sept. 14.

“In this new and unforeseen reality, where we expect thousands more to arrive every week going forward, the city’s system is nearing its breaking point,” Mayor Eric Adams, a Democrat, said in a statement.

New York has recorded over 11,000 illegal immigrants entering its shelter system in the past several months, with others going into the homes of family members or friends. A number have come from Texas, which started bussing asylum seekers who were released by federal authorities to Democrat-run “sanctuary cities” earlier this year.

New York has a law that mandates state and local authorities provide shelter to “the needy.” That means “every asylum seeker that comes to New York will have shelter,” Adams told reporters in a briefing on Thursday.

But officials say they are “reassessing” the city’s practices in following the law because when it was put into place, officials could not “have foreseen” the current situation, a city lawyer told reporters.

Those practices include communications and operational methods.

Adams called Republican Texas Gov. Greg Abbott and other governors who have followed his lead in bussing illegal immigrants to cities “rogue governors” and said officials are trying to figure out various ways to respond to the governors, including legally.

New York is receiving four to six busses per day, according to Manuel Castro, the city’s commissioner of immigrant affairs.

“The Republican party has created a blueprint that all of them are starting to follow,” Adams said.

A spokesperson for Abbott did not respond to a request for comment.

He and other governors have said they’re transporting the immigrants to try to force President Joe Biden, a Democrat, to step up enforcement at the U.S.–Mexico border.

Biden’s administration has rejected calls for help from Washington Mayor Muriel Bowser and hasn’t appeared to offer assistance to New York or Chicago.

Adams was speaking Thursday at a space described as a “resource navigation center” for the illegal immigrants. The centers are enabling access to legal services, school enrollment, and healthcare.

“‘We’ll continue to welcome asylum seekers with open arms and provide them the resources they need,” Adams said.