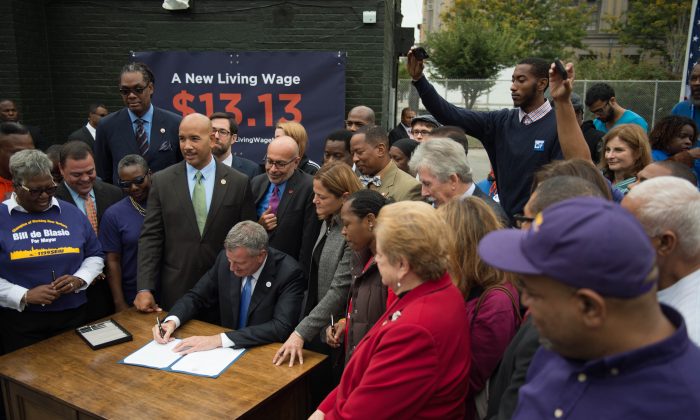 New York City Mayor Bill de Blasio signs an executive order to raise the living wage for workers employed at city-subsidized developments, at St. Mary's Park in the Bronx, N.Y., on Sept. 30, 2014. Workers will now earn $13.13 an hour, and retail tenants at the developments will also be required to pay the higher rate. (The New York City Mayor's Office)
New York

Effective immediately, wages will increase from $11.90 to $13.13 without benefits, and from $10.30 to $11.50 with benefits. The rates will also be adjusted yearly according to the Consumer Price Index.

“As taxpayers, we want our money’s worth. If we provide a subsidy, we want to make sure we get fairness in return,” said de Blasio at a press conference held in St. Mary’s Park in the South Bronx.

City Council passed the Fair Wages for New Yorkers Act in 2012, which first mandated wages higher than the federal minimum for workers employed at developments receiving city subsidies. Known as living wages, the rate takes into account the cost of living in a specific area.

On Tuesday, the mayor expanded the requirement to include retail tenants at these developments, who were previously exempt from paying their employees the higher rates.

The mayor’s office anticipates that the expansion will benefit 18,000 workers within five years, 4,100 of which will be in retail and fast food businesses that often pay the minimum wage rate. The New York State minimum is currently $8 an hour.

“Someone who’s working a full-time job should never live in poverty,” said U.S. Secretary of Labor Thomas Perez at the press conference.

For a typical family of four (two working adults, two children), the adults would have to work 68 hours per week to earn enough to afford basic necessities if they’re working minimum wage jobs, according to MIT (Massachusetts Institute of Technology)’s Poverty in America study.

Perez noted that President Barack Obama is also pushing to increase the federal minimum wage, to $10.10 an hour—an issue the president spoke about in his latest State of the Union address.

The bill stalled in Congress, but the president signed an executive order in February to raise the minimum for workers contracted with the federal government.

De Blasio is hopeful that the state will also increase its minimum wage to that rate when the state legislature convenes in January. “The governor said very clearly this spring that he supports the minimum wage increase,” he said.

When asked by reporters why he decided to use an executive order instead of going through City Council, de Blasio responded that he wanted the pay raise to go into effect immediately.

“This is a matter of urgency,” he said. “As we speak, there are development deals coming together that this could affect, and we want to make sure we have this new opportunity for working people.”

Council Speaker Melissa Mark-Viverito said the council supports the mayor’s executive order. “It doesn’t take away from the role of the council moving forward,” she said. “We’re going to see if there’s ways this could be expanded in other sectors, in other ways.”

Shantel Walker, a fast food worker and labor activist, said the expanded rule will greatly benefit others, like her, who currently makes little more than minimum wage (she makes $8.50 an hour).

But she will continue to fight for a $15 minimum wage and a union for fast food workers. “I know we’ll win,” she said.