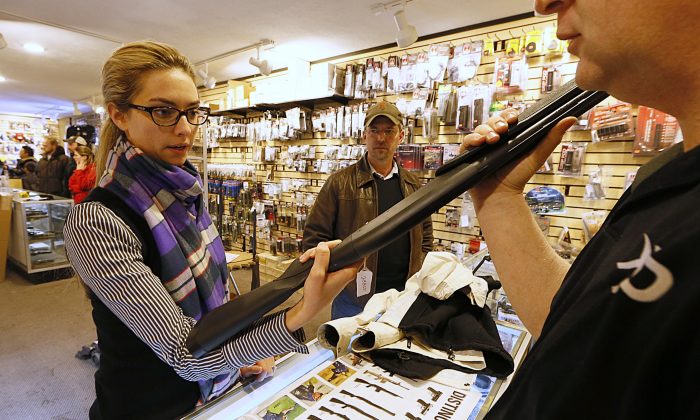 Naomi (last name withheld) looks at a shotgun to purchase for home protection at the 'Get Some Guns & Ammo' shooting range on January 15, 2013 in Salt Lake City, Utah. (George Frey/Getty Images)
12- OBSOLETE

New York City 1 of 15 Cities to Get Free Shotguns?

Free Shotguns 15 Cities: A group called the Armed Citizen Project is planning to give out shotguns in 15 cities, and New York City will be one of them.

“It’s our hypothesis that criminals do not want to die in your hallway,” said Kyle Coplen, a University of Houston graduate who came up with the plan . “We think that society should use that fear to deter crime.”

Coplen told the New York Daily News that the project is coming to New York City soon. “We’re coming — and we’re going to get shotguns into the hands of responsible citizens,” he said.

Coplen aims at arming about 25 percent of the people in mid-to-high crime areas “to establish gun rich zones,” according to the project’s website. The group gives people a $200 single-shot shotgun and free weapons training, provided the applicants pass the necessary background check.

“The goal is to find if there exists a causal link between an increase in the presence of firearms and the level of crime,” Coplen says.

The initiative started in Houston.

In New York City, though, the Police Commissioner, Raymond Kelly, told the Daily News that the project wouldn’t be able to hand out guns. “You need a permit … so obviously you won’t be able to do it here,” Kelly said.

The NYPD can deny permits for reasons including is the applicant lacks character.

Coplen, meanwhile, funds the free giveaways through private donations. He isn’t worried about the NYPD’s stance.

“That’s a legal fight I’m definitely willing to engage them on,” he said.

After learning that the fee to apply for a shotgun permit is $140 as well as a fingerprinting charge of $91.50, Coplen said: “I guess the Bloomberg administration doesn’t want poor people to be able to defend themselves. I guess that right is left to the elites.”