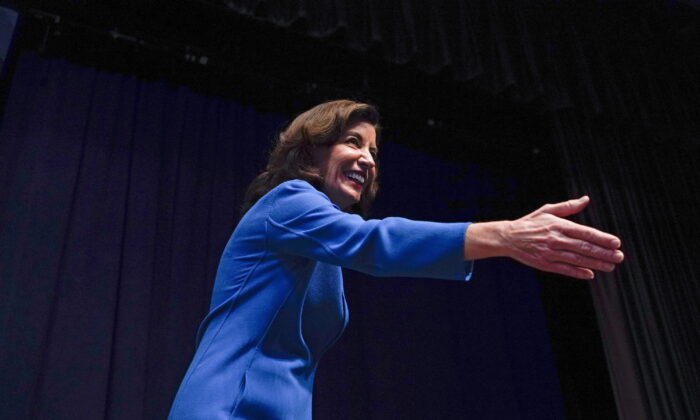 The new law, Senate Bill S8949, allows a person on the ballot to remove themselves if they have been arrested, charged with one or more state or federal misdemeanors or felonies, or convicted of a crime.

It gives Hochul a chance to replace Benjamin with a new running mate.

Hochul, a Democrat, was former Gov. Andrew Cuomo’s lieutenant governor and replaced Cuomo after the latter resigned amid allegations he sexually harassed 11 women, which he denied.

She is running in this year’s election to try to remain governor.

Benjamin was named as her running mate.

Benjamin, also a Democrat, resigned in early April in the wake of his arrest in a federal corruption investigation seven months after Hochul selected him as a partner.

He was accused in an indictment of participating in a scheme to obtain campaign contributions from a real estate developer in exchange for Benjamin’s agreement to use his influence as a state senator to get a $50,000 grant of state funds for a nonprofit organization controlled by the developer.

He said on Monday that he will remove himself from the ballot but insisted on his innocence.

“I will sign the necessary paperwork to remove myself from the ballot. I am innocent of these unsubstantiated charges. However, I would be unable to serve under these circumstances. I want to thank all of my constituents and supporters for giving me the opportunity to serve,” he said in a video message.

Elise Stefanik (R-N.Y.), the chair of the House Republican Conference and a high-profile Republican, denounced the new law.

“Kathy Hochul is using her henchmen in the state legislature to change the law in the middle of an election in order to try to hide her complete failure and benefit herself on the ballot.”

Hochul announced Tuesday that U.S. Rep. Antonio Delgado has been appointed as her lieutenant governor.

“I am proud to appoint Antonio Delgado, an outstanding leader, and public servant, as Lieutenant Governor of New York, and I look forward to working with him to usher in a new era of fairness, equity, and prosperity for communities across the State,” Hochul said in a statement.

The move can potentially allow Delgado to run for the lieutenant governor’s job if he wants it permanently.

“He and Governor Kathy Hochul will make a terrific team, and we wish him all the best in his continued public service as Lieutenant Governor,” she said in a statement.