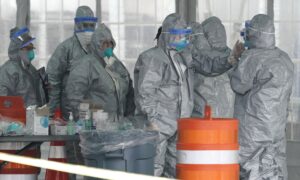 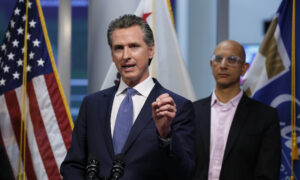 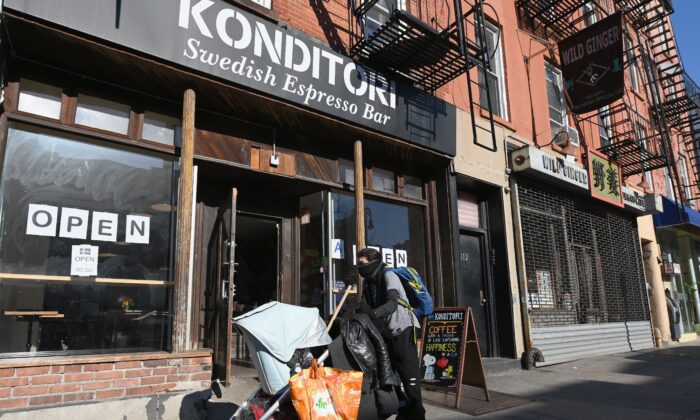 A person walks by a coffee shop in New York City on March 18, 2020. (Angela Weiss/AFP via Getty Images)
AMERICA

New York businesses that rely on in-office workers must decrease their in-office workforce by 50 percent, according to an executive order New York Gov. Andrew Cuomo planned to issue on Wednesday.

“We are announcing a mandatory, statewide requirement that no business can have more than 50 percent of their workforce report to work outside of their home,” Cuomo said at a press conference in Albany.

“No more than 50 percent of the workforce can report for work outside of the home. That is a mandatory requirement. I’m going to do that by executive order.”

Exemptions are being made for “essential services” such as food, pharmacies, shipping, and healthcare.

New York officials reported 1,008 new cases of the CCP virus on Wednesday, bringing the total in the state to 2,382. The majority of the cases are in New York City, where the number of patients more than doubled in 24 hours.

Around 23 percent of patients are hospitalized while 108 patients have recovered and been discharged from hospitals. A U.S. Navy hospital ship was being sent to the state to help boost hospital bed capacity ahead of the expected peak of illnesses in New York.

The Epoch Times refers to the COVID-19 coronavirus as the CCP virus because the Chinese Communist Party’s coverup and mismanagement allowed the virus to spread throughout China and create a global pandemic.

The moves New York officials have made, including the pending order to business, will have an impact on the economy, Cuomo said.

“We’re past that point as a nation. There is going to be an impact on the economy, not just here in New York but all across the country, and we’re going to have to deal with that crisis. But let’s deal with the crisis at hand,” he said.

“Once we get past that, then we’ll deal with the economic crisis,” he added, citing an old Italian expression that the wealthy have their health and everything else can be obtained.

“Together we will reduce density and slow the spread of Coronavirus,” he said in a statement.