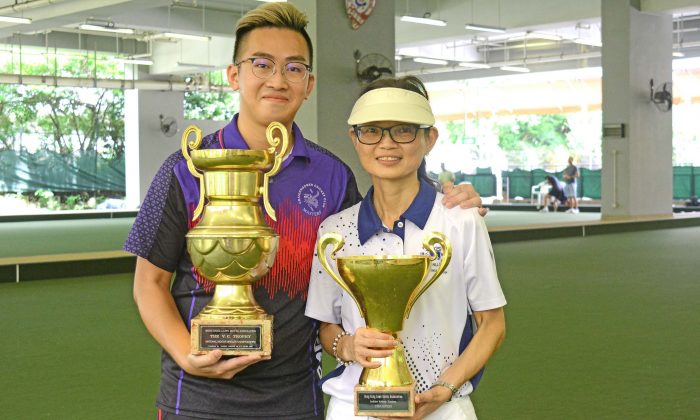 HONG KONG–Two new names were added to the trophy of the National Indoor Singles after Jordi Lo from Craigengower Cricket Club (CCC) and Shirley Ma from Hong Kong Football Club (HKFC) won the title for the first time.

The semi-finals and finals were played last Saturday, July 13 at the indoor green of Club de Recreio.

Both semi-finals for the men were between CCC and HKFC.  Lo defeated 2014 runners-up Kenny Tam into the final, where he met Patrick Choi from HKFC who defeated young bowler Martin Sham.

The two players displayed high level of drawing skill in the final and the head was tight at every end.  However, Lo had the upper hand in most of the ends and won the first five ends with seven shots. Choi pulled one back in the sixth end but could not overturn the deficit, losing the first set 1:9.

Choi fought back in the second set and was leading 4:3 after four ends.  In the fifth end Choi was holding two shots after pushing Lo’s shot bowl away, however Lo trailed the jack with his last bowl to win by two.  Lo went on to win three more ends to win the game.

Lo believed that his management of the green was a crucial factor for his win, “The pace and the bias of the green really suits my style of play and I can play some delicate shots on it.  In most of the ends, my bowl was the first to get close to the jack and this created a lot of pressure to Patrick.”

Another winning factor was his focus on indoor greens lately, “I was not good at artificial greens before.  Earlier this year when I had to play in a Professional Bowlers Association competition in Potters Resort in the UK, I started to study the playing style on artificial greens.  I started to focus on playing indoors even during the league season and now I better understand the way to play and fortunately I can apply such knowledge to the Indoor Singles.”

Choi was disappointed not to add another title to the National Fours he won at the Finals Day a week earlier, “I could not pick up the pace of the green in the first set but I still maintained my confidence in the second set.  I led for a little while but Lo turned the head and kept the pressure on me.  Lo is a good player and if you miss those chances it will just cost you the game.”

In the women’s competition, both players from Seabird Sports Club, including Lychee Lai and 2008 and 2016 champion Queenie Lai, were knocked-out in the semi-finals by June Cheng from Island Lawn Bowls Club and Shirley Ma of Hong Kong Football Club respectively.

Ma started the final with great confidence.  Despite losing the first end by one shot, she took seven shots from the next four ends and set the tone for a massive 13:5 victory for the first set.

Ma was delighted after the win, which is also her first singles title at national level, “Today my mind is in a peaceful state and this helped me to focus on the game.  I managed the green and weight quite well and am consistent throughout the game.  As my opponent also focused on drawing, I don’t need to concern about other tactic and this helped my concentration.”

The U25 Age Group Lawn Bowls Championship will be held this Sunday, July 21 from 9:00 am at the indoor greens of Yuen Chau Kok Sports Complex.