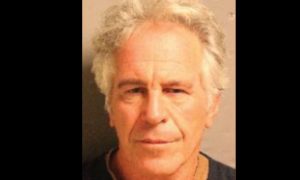 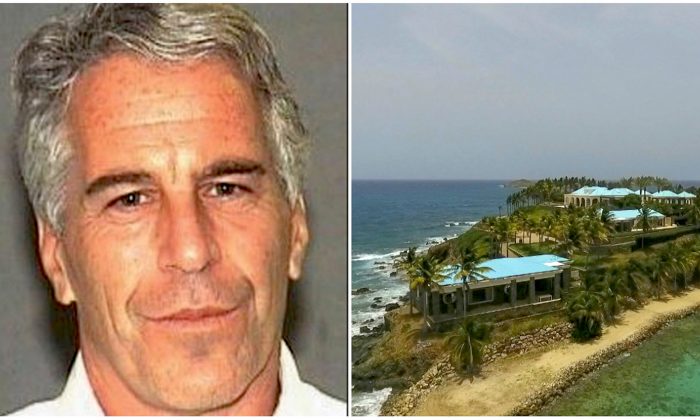 The footage was filmed by video podcaster Jeff Berwick of The Dollar Vigilante and journalist Luke Rudkowski of We Are Change, which describes itself as a “nonpartisan, independent media outlet.”

Rudkowski and Berwick said they managed to sneak into the famous hideaway in the U.S. Virgin Islands after convincing a boat captain to drop them off at the property for “five seconds.”

However, they managed to explore the island for about 30 minutes, filming their findings throughout before they were forced to flee from staff on the island who began chasing them.

The pair walked through various rooms within the property as well as the famed temple, which has been at the center of a number of conspiracy theories.

After getting up-close to the temple, they disappointingly confirmed it was nothing more than a “flat wall with the door painted on.”

Berwick said, “He (Epstein) was a billionaire, but that seemed like the cheapest little temple I’ve ever seen.”

He added, “It almost looked like a Hollywood set.”

Rudkowski noted that one of the strangest things that stood out to him on the island was Epstein’s peculiar taste in art.

He said, “The most interesting things I personally found were these little satanic gargoyles with horns on their heads that were all over the property that were very creepy.

“I also found a chair that was completely made out of horns and looked like some kind of animal hide, that was very creepy and weird to look at.”

Rudkowski also claimed to have seen Epstein’s private “massage room” which was hidden behind “a lot of greenery” and “extremely secluded.”

Elsewhere the video appears to show a private office which Rudkowski and Berwick said was left unlocked. A sign on the wall reads: “Keep calm and carry on.”

The pair also noted that the grass surrounding the property and the swimming pool appeared to be in great condition, leading them to believe the property was still being maintained by staff.

Rudkowski and Berwick said they had decided to sneak onto the island because they were in the area and “no one had really been there.”

“So we were like, ‘Well I guess we have to go and check this out and see if it’s even real,’” they said.

They also claimed to have spoken to local people on the island who told them they had been aware of what Epstein had been doing with regard to his alleged abuse of young women.

“This wasn’t that big of a secret at all,” Rudkowski said, citing conversation with locals, with Berwick saying that such behavior appears to have been “incredibly out in the open.”

Epstein was found dead in his jail cell at the Metropolitan Correctional Center on Aug. 10 while awaiting trial on sex trafficking charges.

His death was ruled as suicide by the New York medical examiner, who said he had hung himself with a sheet from his bed.

However, on Wednesday, famed pathologist Dr. Michael Baden told Fox News that he believes the physical evidence suggests Epstein did not take his own life.

The former chief medical examiner for New York City said, “I think that the evidence points toward homicide rather than suicide.”

Baden—who was hired by Epstein’s brother, Mark Epstein—cited unusual symptoms such as hemorrhaging in the eyes, deep marks around his neck and three broken bones in the thyroid.

He added that the injuries were “more consistent with ligature homicidal strangulation” than suicide.