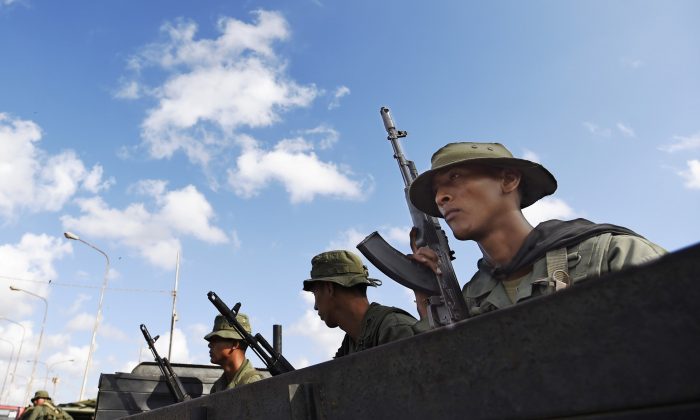 Venezuelan soldiers stand guard at a checkpoint in Paraguachon, Zulia state, Venezuela, in the border with Colombia on September 9, 2015. (Juan Barreto/AFP/Getty Images)
Americas

PARAGUACHON, Colombia—Venezuela’s sudden decision to close another major border crossing with Colombia has left workers, vacationers, and members of a nomadic indigenous community stranded, and further escalated tensions between the neighboring countries.

The offensive has shelters and human rights groups in Colombia struggling to absorb thousands of migrants who have fled their Venezuelan homes.

The crackdown had targeted Táchira State across the border from Cúcuta, a Boston-size city in Colombia that has long relied on smuggled gas, food, and other goods purchased in Venezuela at bargain-basement subsidized prices.

In moving his focus north to Zulia State, Maduro is encroaching on a more vital economic hub around the oil metropolis of Maracaibo, Venezuela’s second-largest city. His administration took out an advertisement in the New York Times on Wednesday, saying that Venezuela needed to take steps to combat smugglers who would do the country harm, but was committed to respecting human rights and supporting peace.

But Colombia took the newest closure as an affront, with President Juan Manuel Santos saying Wednesday that he had opened channels of communication and Venezuela had responded by shutting even more of the border.

I’m not destroying the Bolivarian revolution. The revolution is self-destructing because of its own effects, not because of the Colombians.
— Juan Manuel Santos, president, Colombia

In his angriest statements to date, Santos went after the 16-year-old “Bolivarian” socialist revolution launched by late President Hugo Chávez.

“I’m not destroying the Bolivarian revolution,” he said. “The revolution is self-destructing because of its own effects, not because of the Colombians.”

Santos also reiterated his willingness to engage in direct dialogue with Maduro to resolve the crisis, perhaps under the auspices of Uruguay.

A long line of cars waited for a chance to pass through a fenced-up border checkpoint Tuesday night as bored soldiers watched a soccer game.

Venezuelan bus driver Hector Medina had spent the whole sweltering day stranded on the Colombian side of the border, while his passengers had tried their luck walking across.

“You can’t just out of nowhere close the border and leave everyone locked out like this,” he said.

Nearly 20,000 more Colombians, some of whom have lived in Venezuela for years, have returned voluntarily, fearing reprisals.

In the space of two weeks, Maduro has closed six crossings and deported about 1,500 Colombians without legal status, blaming the migrants for a surge in crime and contraband along Venezuela’s western edge.

Nearly 20,000 more Colombians, some of whom have lived in Venezuela for years, have returned voluntarily, fearing reprisals as reports spread about security forces uprooting migrants and marking their homes for demolition.

The flood of returnees has overwhelmed emergency shelters, leading Colombia to warn of a looming humanitarian crisis.

Maduro could also face resistance from hundreds of thousands of Wayuu Indians settled on either side of the border who don’t recognize the international division. The tribe has long dominated economic life on the isolated Guajira Peninsula, shared by both countries on South America’s northern tip, and is heavily involved in smuggling, which they don’t consider an illicit act.

Venezuelan authorities said they will respect the Wayuu’s traditional nomadism and increase education grant programs even as an additional 3,000 troops are deployed to Zulia.

“They are masters of their own land,” Vice President Jorge Arreaza said. “They will be free to move back and forth, just not with contraband.”

But some members of the indigenous community said they had been blocked at checkpoints and would have to try to sneak across the border. Leaders were already publicly denouncing the closure by Tuesday afternoon.

“I don’t think this is what we deserve, because all we do is take care of our land,” said Wayuu activist Ricardo Fernandez.

Maduro said more border crossings could be closed in the coming days. In the same address, he offered to take in 20,000 refugees from the civil war in Syria.

In recent days, Colombia has stepped up a diplomatic campaign against the border offensive.

Foreign Minister María Ángela Holguín met with the United Nations’ High Commissioner for Human Rights in Geneva on Monday to denounce what she called a deliberate campaign of scapegoating Colombians for Venezuela’s deep-seated economic problems, which include widespread shortages and triple-digit inflation.

Maduro says he is the target of U.S.-backed conservatives in Colombia bent on toppling his socialist government while turning a blind eye to decades of political and drug-fueled violence in Colombia that has made Venezuela a haven for many of its neighbor’s poor.

The closing of the border in Zulia had at least one immediate economic effect: The price of gasoline nearly doubled overnight. Gas is nearly free in Venezuela, and smugglers operate a brisk trade in Colombian border towns.

The social effects that the border offensive has had on the estimated 5 million Colombian nationals living in Venezuela is more subtle, but could also be longer-lasting.

Luis Fernando Mondragon, 51, hiked for an hour and a half on a rudimentary trail to reach the Colombian side of the border Tuesday, carrying all his belongings. He had been living in San Cristóbal, but said the discrimination against Colombians had become unbearable.

“I’m going back to my homeland to harvest coffee beans and forget about all this,” he said.