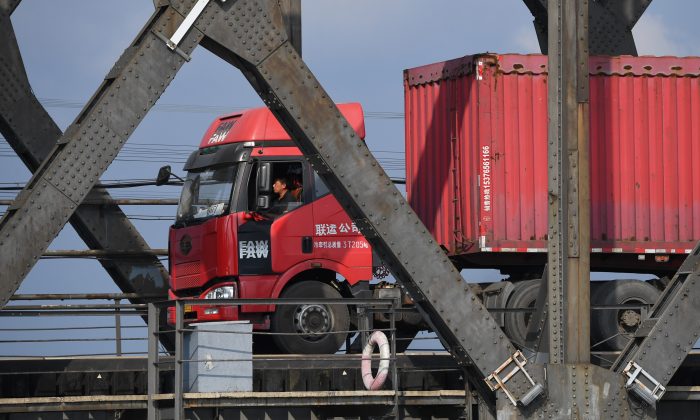 A truck returns over the Friendship Bridge, from the North Korean town of Sinuiju to the Chinese border city of Dandong, in China's northeast Liaoning province on Sept. 5, 2017. The Broken Bridge once connected Dandong and the North Korean town of Sinuiju, but was bombed by the US during the Korean war and now only reaches half way across the Yalu River. (GREG BAKER/AFP/Getty Images)
Asia & Pacific

The U.S. Treasury Department has put in place sanctions against Chinese and North Korean companies after President Donald Trump announced North Korea would be redesignated a state sponsor of terrorism.

The Treasury Department’s Office of Foreign Assets Control (OFAC) sanctioned one individual, 13 entities, and 20 vessels on Nov. 21 in a bid to disrupt funding for North Korea’s nuclear and ballistic missile programs.

“As North Korea continues to threaten international peace and security, we are steadfast in our determination to maximize economic pressure to isolate it from outside sources of trade and revenue while exposing its evasive tactics,” said Treasury Secretary Steven Mnuchin in a statement.

“These designations include companies that have engaged in trade with North Korea cumulatively worth hundreds of millions of dollars,” he continued. “We are also sanctioning the shipping and transportation companies, and their vessels, that facilitate North Korea’s trade and its deceptive maneuvers.”

The sanctions prohibit U.S. companies from doing any business with the designated entities and individuals.

Several of the companies targeted are Chinese trading companies operating in the China-North Korea border city of Dandong.

The goods in question include computers, coal, and other raw materials.

The OFAC also designated Sun Sidong and his company, Dandong Dongyuan Industrial Co., Ltd for exporting over $28 million worth of goods to North Korea over several years, including motor vehicles, electrical machinery, radio navigational items, and other items associated with nuclear reactors.

“Dongyuan has also been associated with front companies for weapons of mass destruction-related North Korean organizations,” said the Treasury Department.

Despite the fact that the sanctions target four Chinese companies, the State Department does not expect them to jeopardize Chinese cooperation with North Korea, a spokesperson said Tuesday.

“The world has come together behind this issue recognizing how destabilizing the activities are on the part of Kim Jong Un’s regime. We have a good relationship with China; that’s not going to change because we’ve made this designation,” said Heather Nauert in a press briefing Tuesday.

In response to an earlier question, Nauert said China recognized the problems North Korea was creating for them.

“I think that North Korea—and I imagine the Chinese would be very upfront in saying this as well—has become a bit of a thorn in their side.”

The OFAC also designated six North Korean shipping and trading companies and blocked 20 of their vessels.

Many of the companies use deceptive shipping practices to skirt U.N. sanctions, including prohibited ship-to-ship transfers.

The Treasury Department released photographs revealing such a transfer or what may have been oil between an unnamed ship and North Korean vessel Rye Song Gang 1.

The company has exported workers to China, Russia, Cambodia, and Poland.