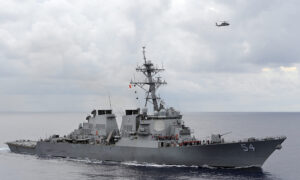 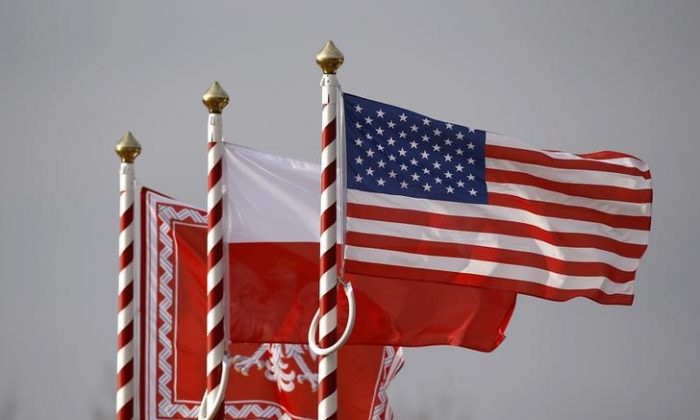 U.S. (R to L), Poland's flags and jack of the President of Poland are seen during the inauguration ceremony of bilateral military training between U.S. and Polish troops in Zagan, Poland, Jan. 30, 2017. (REUTERS/Kacper Pempel)
International

New US-Led Force to Deter Russia in Poland From April

BRUSSELS—A U.S.-led battalion of more than 1,100 soldiers will be deployed in Poland from the start of April, a U.S. commander said on Monday, as the alliance sets up a new force in response to Moscow’s 2014 annexation of Crimea.

More than 900 U.S. soldiers, around 150 British personnel and some 120 Romanian troops will make up the battlegroup in northeastern Poland, one of four multinational formations across the Baltic region that Russia has condemned as an aggressive strategy on its frontiers.

“This is a mission, not a cycle of training events,” U.S. Army Lt. Colonel Steven Gventer, who heads the battlegroup, told a news conference. “The purpose is to deter aggression in the Baltics and in Poland … We are fully ready to be lethal.”

Britain, Canada and Germany are leading the other three battlegroups in Estonia, Latvia, and Lithuania, which are due to be operational by June. They will have support from a series of NATO nations including France.

In total, some 4,000 NATO troops—equipped with tanks, armored vehicles, air support, and hi-tech mission information rooms—will monitor for and defend against any potential Russian incursions.

Moscow, which denies having any expansionist or aggressive agenda, accuses NATO of trying to destabilize central Europe and has respond by forming four new military divisions to strengthen its western and central regions and stepping up exercises.

Seeking to avoid stationing troops permanently on Russia’s borders, the new NATO force across the Baltics and Poland can rely on a network of eight small NATO outposts in the region, regular training exercises and, in the case of attack, a much larger force of 40,000 alliance troops.

“We are not the entirety of NATO’s response,” said U.S. Army Major Paul Rothlisberger, part of the U.S.-led battalion to be based in Orzysz, around 140 miles northeast of Warsaw.

The alliance is seeking to show the ex-Soviet countries in NATO that they are protected from the kind of annexation Russia orchestrated in February in 2014 in Ukraine’s Crimea.

It also wants to avoid a return to the Cold War, when the United States had some 300,000 service personnel stationed in Europe, and stick to a 1997 agreement with Moscow not to permanently station forces on the Russian border.

The plan is being implemented as Western powers try for a peace settlement in eastern Ukraine, where NATO says Russia supports separatist rebels with weapons and troops.

Russia plans to stage large-scale war games near its western borders this year, but has not said how many troops will take part.