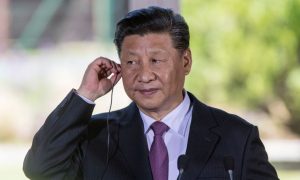 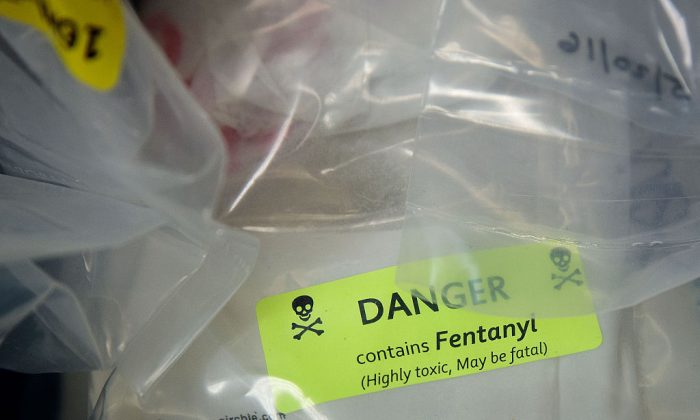 Bags of heroin, some laced with fentanyl, are displayed before a press conference regarding a major drug bust, at the office of the New York Attorney General, in New York City, on Sept. 23, 2016. (Drew Angerer/Getty Images)
US-China Relations

US House Bill Proposes Sanctions Against Chinese With Ties to Fentanyl Production, Trafficking

U.S. Reps. Chris Smith (R-N.J.) and Thomas Suozzi (D-N.Y.) have introduced legislation to tackle the flow of fentanyl into the country from China, which has contributed to the current opioid crisis.

“Chinese-made fentanyl is ending up on our streets and the human cost is real—over 29,000 overdose deaths in 2017 were fentanyl-related,” Smith said in a statement from his office, citing data from the U.S. Centers for Disease Control and Prevention (CDC).

Fentanyl, a synthetic opioid, is 100 times more potent than morphine and 50 times more powerful than heroin, according to the CDC. As little as two milligrams is considered a lethal dosage for most people.

And, according to a 2016 report by the U.S. Drug Enforcement Administration (DEA), there was a 79 percent increase in U.S. deaths related to synthetic opioids between 2013 and 2014; that trend has continued to climb. DEA published another report in September 2018, noting that the vast majority of illicit fentanyl-class substances and synthetic drugs coming into the United States are manufactured in China.

The new bill, named “Combating Illicit Fentanyl Act of 2019,” would require the departments of State and Treasury to jointly submit a report to appropriate congressional committees—such as the Foreign Affairs and Financial Services panels—to identify persons and Chinese officials “involved in the production of fentanyl and its trafficking into the United States.”

The measure calls on the U.S. president to impose financial sanctions against any identified individuals or to make them ineligible for visas or admission to the United States, under existing laws that grant the president such power.

The individuals could also be held accountable under the Global Magnitsky Act, according to the press release. Passed into law in 2016, the Act allows for sanctions against individuals who commit human-rights violations, including freezing their U.S. assets and barring them from entry to the United States.

“Our law enforcement agencies are doing all they can, but the Chinese government seems to have little interest in stopping the flow of this deadly substance across our borders. This bipartisan bill will help hold China accountable for its contribution to the opioid epidemic in our country,” Suozzi said in the release.

Smith said in an email to The Epoch Times that the Chinese regime allows fentanyl to be exported to the United States because it “is a weapon in an asymmetric warfare campaign.”

“Beijing has failed to police the production and trafficking of fentanyl that is killing Americans because it fits in with its long-term strategic objectives,” the congressman said.

The regime’s treatment of fentanyl directly contrasts with methamphetamine, Smith said. Methamphetamine is consumed domestically in China, and unlike fentanyl, is subject to strict enforcement.

This toleration of fentanyl clearly contrasts with methamphetamine, which is consumed domestically in China. Methamphetamine—but not fentanyl—producers and pushers are therefore subject to draconian crackdowns.

U.S. experts have identified problems in China’s synthetic drug regulations: There is “deficient local drug inspection and enforcement capabilities, coupled with corrupt practices among local officials,” according to a February 2017 report by the U.S.-China Economic Security Review Commission (USCC), which is tasked to monitor the national security implications of Sino–U.S. trade.

In December 2018, Chinese leader Xi Jinping, while meeting with U.S. President Donald Trump at the G-20 summit in Argentina, promised to crack down on Chinese-made fentanyl. However, Smith pointed out that Beijing’s progress since has been minimal.

“We cannot allow this matter to become another Chinese empty promise—anyone involved in the production and trafficking of fentanyl must be held accountable,” Smith said in the release.

This isn’t the first time that U.S. lawmakers have drafted legislation to address the fentanyl problem in the United States. In February, Sen. Chuck Schumer (D-N.Y.) introduced the Fentanyl Sanctions Act, which called for the establishment of a commission to report on the flow of synthetic opioids from China and Mexico, as well as increase funding to law enforcement to combat trafficking of the drugs.

Schumer’s bill similarly contains measures to identify traffickers in China and deny them visas and access to U.S. banks.

In October 2017, Trump declared the spread of opioids, including fentanyl, a public health emergency, and vowed to stop the “flood of cheap and deadly” fentanyl manufactured in China from entering the country.

In August 2018, Wang Bin, a Chinese living in Massachusetts, pleaded guilty to federal charges of distributing illicit drugs, including fentanyl, shipped from China.

That same month, Zheng Fujing and his father Zheng Guanghua, both from Shanghai, were charged for operating a criminal enterprise, importing drugs including fentanyl, and money laundering. The 2015 deaths of two Ohio residents were directly traced to fentanyl manufactured by the Zheng organization.

Drug traffickers have taken advantage of loopholes in the U.S. Postal Service to ship fentanyl purchases through the mail system.

“Traffickers can typically purchase a kilogram of fentanyl powder for a few thousand dollars from a Chinese supplier, transform it into hundreds of thousands of pills, and sell the counterfeit pills for millions of dollars in profit,” according to the July 2016 DEA report.

In October 2018, the White House announced that the United States would withdraw from the Universal Postal Union, noting that foreign shippers were being charged subsidized rates determined by the agency—making it cheap and easy for traffickers to ship fentanyl and other narcotics into the United States.