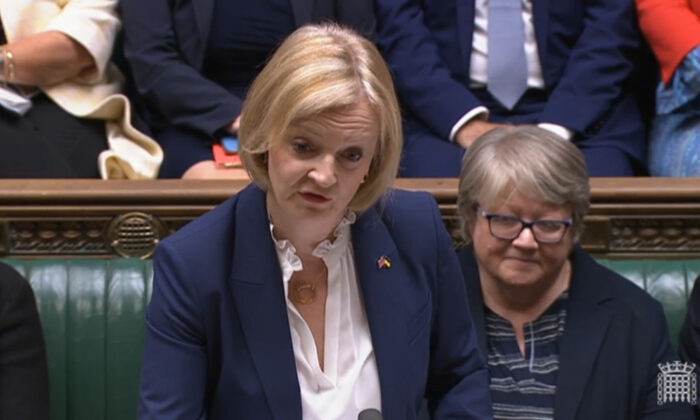 Newly appointed Prime Minister Liz Truss has confirmed that planned legislation to regulate online spaces will return, even as she signaled that it could be watered down in response to concerns about regulatory overreach and restrictions on free speech.

During her first session of Prime Minister’s Questions in the House of Commons on Sept. 7, Truss announced the return of the Online Safety Bill saying that she wanted to make sure “we protect the under-18s from harm, but we also make sure free speech is allowed, so there may be some tweaks required.”

She added that “we need to protect people’s safety online.”

There was a sigh of relief from free speech advocates in July when the online safety law was temporarily put on hold. Some like Toby Young, the general secretary of the Free Speech Union, an organisation dedicated to upholding free speech in Britain, had hoped the Bill might not come back at all.

He “welcomes the fact that the new Prime Minister recognises that the Bill in its current form poses a threat to free speech,” Young told The Epoch Times by email.

“However, when [Truss] looks at it in detail, she will quickly realise it needs more than a ‘tweak.’ My suggestion is the government goes back to the drawing board. There is surely a way of making the internet safe for children and making sure social media companies remove illegal content, both laudable aims, without stifling public debate,” he said.

There has been fierce debate around the proposal, a major set of regulations for the internet, since it was introduced to Parliament on March 17, to “protect children from harmful content such as pornography and limit people’s exposure to illegal content, while protecting freedom of speech.”

The measure would force Google, Twitter, Meta (parent company of Facebook), and others to abide by a code of conduct overseen by online regulator Ofcom and remove “legal, but harmful” content.

In July, former ministers warned that it gave “unprecedented censorship powers” to the secretary of state and Ofcom. At the time, Conservative MP David Davis said that “the Bill could end up being one of the most significant accidental infringements on free speech in modern times.”

The Christian Institute, which has run a campaign on the legislation, is concerned that mainstream Christian views and socially conservative content would be at the mercy of executives in Silicon Valley.

“The new PM has signalled her willingness to amend the Online Safety Bill to protect free speech while retaining protections for under the 18s. This is what we and many others have been calling for,” Christian Institute Deputy Director Simon Calvert told The Epoch Times in an email.

“At a time when free speech is under such attack, we can’t legislate to incentivise Big Tech to take down even more content for ideological reasons,”  he said. “Free speech in the UK should not be decided by Silicon Valley executives.

“The other issue the PM needs to address is the massive powers the Bill gives to Government ministers to rewrite ‘online safety’ laws without proper Parliamentary scrutiny. The so-called ‘Henry VIII’ powers in the Bill are much too far-reaching. Who knows how future governments might use them.”

Fixated on ‘Legal But Harmful’

Victoria Hewson, head of regulatory affairs and research associate at the free-market think tank Institute of Economic Affairs, told The Epoch Times that she’s worried about the reported direction of the bill.

“While it is good that it is being reviewed with a view to protecting freedom of expression, I am concerned that a lot of commentators and legislators are fixated on ‘legal but harmful,’ and that dropping those sections from the Bill will be seen as a victory, free speech preserved,” she said in an email.

“But, in reality, and as described in our recent briefing paper, ‘legal but harmful’ is far from the only, or even the worst problem with the Bill.”

Defining “legal but harmful” means that social media platforms will be required to tackle content that may cause people distress.

“So basically they might end up taking out ‘legal but harmful’ but making things that people think are harmful illegal. Not a brilliant outcome.”

The child protection sections, which some have praised, should also not “get a free pass,” she added.

“Requiring people to identify themselves for age verification, or making platforms use behavioural biometrics to work it out, so that under-18s don’t see child inappropriate content (including just using Google) is intrusive and disproportionate,” Hewson said.

Officials at the Department for Digital, Culture, Media, and Sport didn’t respond by press time to a request by The Epoch Times for comment.