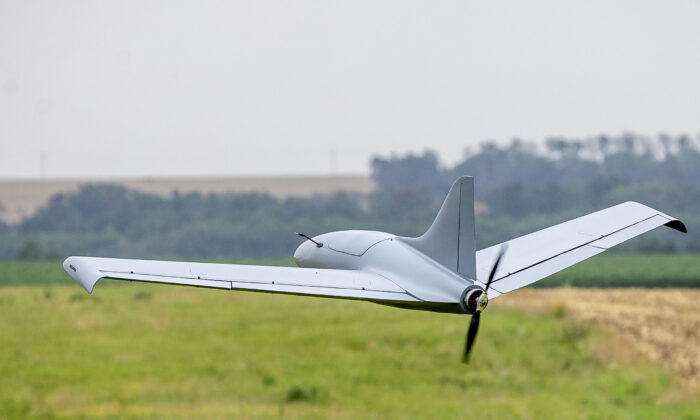 The defence and intelligence technology firm Raytheon UK said the war in Ukraine has highlighted the threat posed by drones.

“We’ve all seen that asymmetric threats like drones, rockets, artillery, and mortars are a serious problem, and demand is spiking for cost-effective lasers to defeat them,” said Michael Hofle, senior director of High Energy Lasers at Raytheon Intelligence and Space.

Experts expect high-energy lasers to make up as much as 30 percent of an air defence’s infrastructure in the future, said John Gallagher, managing director of weapons and sensors at Raytheon UK.

The planned “advanced laser integration centre” will be a European hub for high-energy laser weaponry, the firm said, and will be based in Livingston, some 15 miles from Edinburgh.

The centre will focus on the testing, fielding, and maintenance of defensive high-energy laser (HEL) weapons.

Gallagher said that establishing a regional laser integration centre in the UK is “an important step to deliver advanced defensive technology where it’s needed, while reducing overall costs of these systems.”

Last September, the Ministry of Defence (MoD) said the British armed forces would trial laser and radio frequency weapons as part of a “novel weapons programme.”

These new weapons will be integrated onto existing platforms for the Royal Navy and British Army and will undergo user experimentation from 2023 to 2025, the ministry said.

The first laser device will be fitted onto a Royal Navy Type 23 frigate to detect, track, engage, and counter unmanned aerial vehicles (UAV).

The MoD awarded a demonstrator contract to Raytheon UK, which was tasked to provide a high-energy laser weapon system to be installed on the UK’s Wolfhound land vehicle.

According to the MoD, these “directed energy weapons,” which are powered by electricity and operate without ammunition, will significantly reduce operating costs, increase platform endurance, and provide “unprecedented offensive and defensive flexibility to personnel on the front line.”

Russia Claims to Be Using Lasers in Ukraine

Laser weapons are reportedly already being used in the war in Ukraine.

Russia said in May that its armed forces were using a new generation of powerful laser weapons in Ukraine to burn up drones, deploying some of Moscow’s secret weapons to counter a flood of Western arms supplied to its former Soviet neighbour.

Yury Borisov, the deputy prime minister in charge of military development, told a conference in Moscow that a laser weapon called Peresvet was already being widely deployed and it could blind satellites up to 1,500 kilometres (930 miles) above Earth.

He said, though, that there were already more powerful Russian systems than Peresvet that could burn up drones and other equipment.

Borisov told Russian state television that the first prototypes of such weapons were already being used in Ukraine. He said the weapon was called “Zadira.”