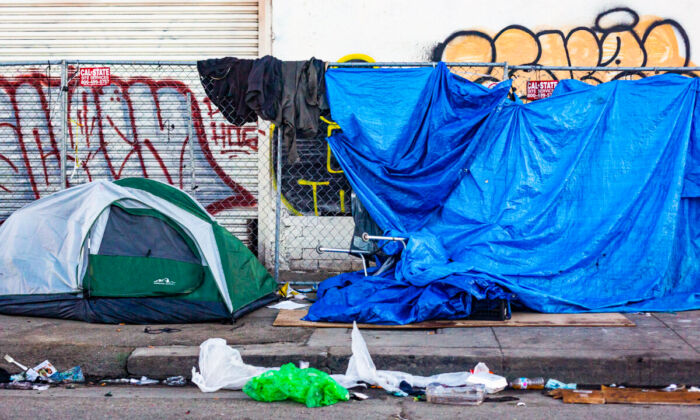 Tennessee will be the first state in the nation to make camping on public land a felony—punishable by up to six years in prison—when a controversial new law takes effect on July 1.

This creates complications for the unsheltered homeless population amid the backdrop of an affordable housing crisis.

The fallout from the new legislation also will put added pressure on the state’s rescue missions, especially in cities with a high volume of destitute people, such as Nashville.

Shelters statewide work to provide assistance and housing to a community of 7,256 people who lack permanent lodgings.

Nearly 35 percent of that number are living unsheltered; that’s the group that stands to be most affected by the new law.

In other words, more than 2,500 people could face time in prison if police catch them setting up camp on public or state property.

These include popular areas for tent camps, such as city parks and green spaces near bike paths and river walks.

“Once they have that felony conviction, it makes [finding] housing harder, and it makes getting a job harder,” she said.

Complicating things further is the dire shortage of affordable and low-income housing in Tennessee because of soaring demand and lack of construction from the previous decade.

Within the population of renters in Tennessee, 26 percent are classified as ELI households. Further, 67 percent of ELI renters are severely cost-burdened by housing, leaving them vulnerable to minor economic changes that can easily end in homelessness.

“Right now, housing is a big issue, and there’s not enough of it. Affordable housing doesn’t exist for the people we serve,” Gatlin said.

However, she also made it clear that she wasn’t opposing the new law, but rather the felony offense attached to it. Gatlin noted most shelters already have a love-hate relationship with city anti-camping ordinances.

Tennessee Gov. Bill Lee declined a direct endorsement of House Bill 0978, but let it become law without his signature on May 3. He told reporters during a press conference that he had concerns over the “unintended consequences” of the legislation, but was also worried about things such as the “issues of people on public property.”

Regarding homeless trends, some cities in Tennessee have experienced a plateau or decrease in recent months. Other regions in the state, particularly Knoxville and southeastern cities such as Chattanooga, have seen their numbers surge since last year.

In Knoxville, the population of homeless people has jumped by 50 percent since 2021, according to a recent report.

That number soars to a 153 percent increase in southeastern Tennessee, based on data from the Chattanooga Regional Homeless Coalition (CRHC).

Nate First, of Knoxville Homeless Management Information System (Knox HMIS), reiterated the need to address those afflicted by all kinds of homelessness, whether chronic or recent, in a May statement from the mayor’s office.

“Every community’s response to homelessness must address these events at both ends, by housing people who are already homeless as well as by preventing episodes of homelessness before they start,” First said.

He also said one of the primary factors contributing to homeless trends listed on the Knox HMIS dashboard is “no affordable housing.”

Although Nashville has experienced an overall 5 percent decline in displaced people since 2020, Cheryl Chunn, vice president of development at the Nashville Rescue Mission, told The Epoch Times that a lack of low-income housing keeps shelter beds full.

800 People in Shelters Every Night

“We have 800 men, women, and children we take care of every single night. Certainly, our capacity has grown with the struggling economy and housing shortage here in Nashville,” Chunn said.

A 2021 report from the city mayor’s office revealed that the Music City needs to create an additional 18,000 affordable housing units for people earning 80 percent of the area’s median income level or lower to address the current crisis.

Yet, when it comes to the logistics of how the new law will be enforced, police departments are still working out the details.

“The statute is currently under review by the MNPD,” Metropolitan Nashville Police Department spokesman Don Aaron told The Epoch Times.

However, a silver lining exists that may help address the need to camp in city parks.

There’s an abundance of work opportunities in Tennessee, which is currently hard-pressed for employees in nearly every field.

“On the plus side … there are a ton of jobs out there. And everybody has been raising their wages and adding sign-on bonuses,” Gatlin said. “The job market is plentiful for low wage, medium wage, and skilled people with certifications.”