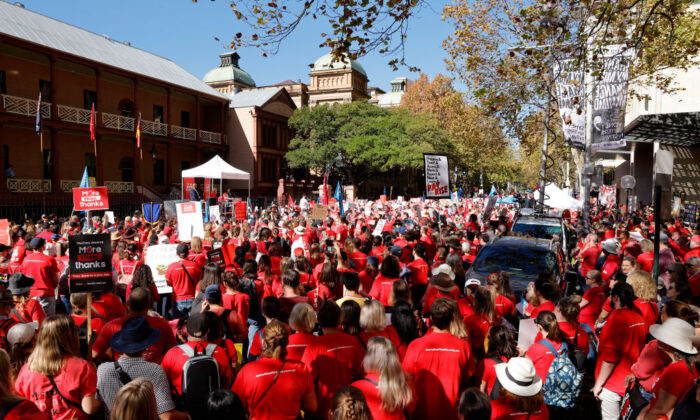 School teachers march along Macquarie St towards NSW Parliament in Sydney, Australia on May 04, 2022. (Photo by Jenny Evans/Getty Images)
Australia

New South Wales (NSW) teachers are striking for 24 hours on Wednesday over pay and workload issues.

“If we don’t pay teachers what they are worth, we won’t get the teachers we need,” he said.

“That the government is pursuing a new award that seeks to impose a 2.04 percent salary cap, with no change to the crippling working conditions experienced by the profession for a three-year period, is contemptuous.”

Gavrielatos added that with inflation at 3.5 percent and expected to grow, this would equate to a cut in teacher’s real income.

Teachers and principals are seeking a salary increase of between 5 and 7.5 percent per annum, as well as two hours a week of extra preparation time.

Gavrielatos stressed that acting on uncompetitive salaries and unsustainable workloads is required to stop teachers leaving and attract people into the profession to fix the shortages.

“The profession is now left with no alternative but to act in the interest of our students and our profession, and take industrial action,” he said.

“The teacher shortage has created a crisis in our classrooms. As of February, there were a total of 2,383 permanent vacancies across 1,251 schools in NSW.

Meanwhile, Education Minister Sarah Mitchell told Today that the government has been working through wage negotiations for several months and has tried to delay the Industrial Relations Commission (IRC) hearing in order to consider wage policy issues as part of the upcoming Budget.

The IRC is the state body that sets conditions of employment, fixes wages and salaries by creating industrial awards, and approves enterprise agreements.

“We asked the Federation not to go ahead, but the union bosses have chosen to strike anyway, and it’s frustrating and it’s disappointing, and I share that concern on behalf of parents,” she said.

The government is considering scrapping the 2.5 percent per annum wage cap, and Mitchell stressed this is part of the current Budget negotiations.

“Obviously, we’ve seen a two and a half percent pay increase for our teachers year on year. We brought the most recent one in in January,” she said.

“That’s despite the award negotiations still ongoing. We did that because we want to pay our teachers as much as we can under our wages policy.

“I think our action to delay the IRC really does send a very strong message that we are looking seriously at these issues,” Mitchell said.

She went on to say that there’s a process to go through and Wednesday’s industrial action doesn’t serve any purpose in getting to the desired outcome, but rather disrupts parents and families.

“The premier made that very clear yesterday…that this is something that is being considered by us through our Budget process, and of course, when we’re in a position to share that with our frontline staff, we will as we go through those Budget deliberations,” Mitchell said.