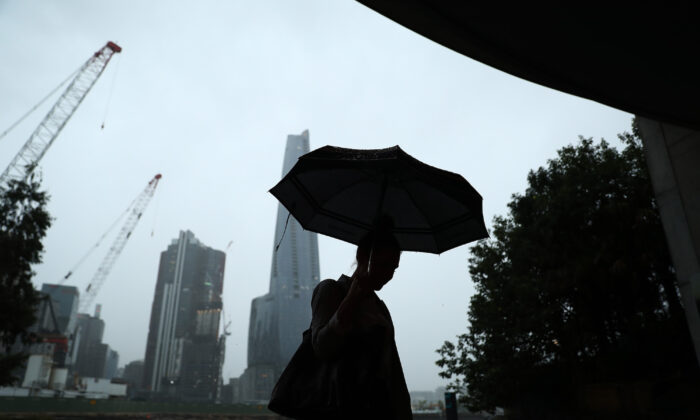 A women walks under an umbrella as heavy rain falls at Barangaroo Reserve in Sydney, Australia, on March 18, 2021. (Mark Metcalfe/Getty Images)
Australia

Flood warnings were issued for areas south and west of Sydney while residents and businesses in low-lying parts of suburbs including Camden, Wallacia, Liverpool, Georges Hall, Chipping Norton, Lansvale and Moorebank were told to get out before they got cut off by rising waters.

By Sunday morning, there was major flooding at Menangle in Macarthur, southwest of Sydney, with river levels exceeding those seen in March this year.

Riverine flooding was expected along the Hawkesbury and Colo Rivers from Sunday, with major flooding at North Richmond possible from the afternoon.

Authorities are confident they are ready to help NSW residents caught out by the wild weather, and avoid a repeat of their heavily criticised flood response earlier this year.

Defence force helicopters and troops remain on standby, while emergency services personnel are working around the clock.

The weather-front battering the state’s east coast is forecast to get worse before it gets better, with wild winds, rough seas and heavy rain expected to last until Monday.

With three flood rescues carried out on Friday and Saturday, people were urged to avoid non-essential trips as the deluge put a dampener on the opening weekend of the NSW school holidays.

Flooding is also possible for the Hunter, Central Coast, the Greater Sydney region and the South Coast, with flood watches in place for catchments between Newcastle and Batemans Bay, including Sydney and the Illawarra.

A severe weather warning for damaging winds and heavy rainfall was in place on Sunday for Sydney’s metropolitan areas, the Illawarra, and parts of the Hunter, Central Tablelands, and Southern Tablelands forecast districts.

The Upper and Lower Nepean and Hawkesbury rivers are also causing concern as already-soaked catchments come in for another lengthy drenching.