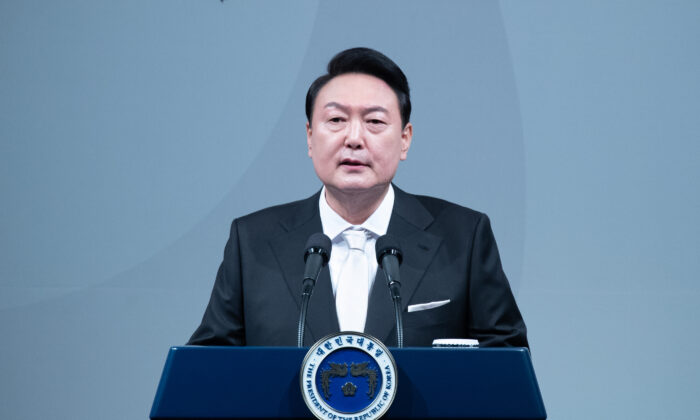 South Korean President Yoon Suk-yeol speaks during an inaugural dinner at a hotel, after his inauguration ceremony at the new presidential office in Seoul, South Korea, on May 10, 2022. (Jeon Heon-Kyun/Pool via Getty Images)
Asia & Pacific

SEOUL—South Korea’s new president Yoon Suk-yeol said on Tuesday that North Korea’s weapons programs pose a threat but that he is ready to provide an “audacious” economic plan if the North is committed to denuclearization.

Yoon gave the remarks in his inauguration speech after being sworn in at a ceremony in Seoul. He won a tight election in March as the standard bearer of the main conservative People Power Party, less than a year after entering politics following a 26-year career as a prosecutor.

He has signaled a tougher line on North Korea, warning of a preemptive strike if there is a sign of an imminent attack and vowing to strengthen the South’s deterrent capability. But his speech was seen as focused more on his willingness to reopen stalled denuclearization talks with Pyongyang.

“While North Korea’s nuclear weapon programs are a threat not only to our security and that of Northeast Asia, the door to dialogue will remain open so that we can peacefully resolve this threat,” Yoon said.

“If North Korea genuinely embarks on a process to complete denuclearization, we are prepared to work with the international community to present an audacious plan that will vastly strengthen North Korea’s economy and improve the quality of life for its people,” he added.

Yoon did not elaborate on his reengagement or economic plan for the North. But his national security adviser, Kim Sung-han, told Reuters in February that his team would devise a roadmap in early days in which Pyongyang could quickly earn sanctions relief or economic aid in exchange for denuclearization measures.

Yoon could face a security crisis if North Korea carries out its first nuclear test in five years, as U.S. and South Korean officials warned, after it broke a 2017 moratorium on long-range missile testing in March.

Yoon won the election on a platform of fighting corruption and creating a more level economic playing field.

Yoon did not mention inflation, but cited low growth, rising unemployment and wage gaps as key economic challenges, pledging to address those by focusing on developing science, technology, and innovation.

Wang, at a meeting with Yoon, relayed Chinese leader Xi Jinping’s letter and invitation to China, and expressed Beijing’s hopes for stronger cooperation on North Korea, bilateral, and global issues.

Yoon separately met Hayashi and thanked him for conveying a letter from Prime Minister Fumio Kishida, saying he hoped to meet him soon and work together to improve relations.

Yoon promised stronger support for the U.S. alliance to Emhoff, who also delivered a letter from President Joe Biden and said Biden was looking forward to their first summit, scheduled for this month, and was hoping for closer cooperation.

After the inauguration, Yoon moved to a new office at a former defense ministry building, holding his first meeting with aides and appointing seven cabinet nominees who had passed their confirmation hearings, including finance and defense ministers.

He has moved the presidential office and residence from the traditional Blue House under a $40 million plan, though his predecessor Moon Jae-in criticized it as rushed and a national security risk.

A separate event was held at the Blue House, where 74 citizens selected by lottery entered the long enclosed complex, which was opened to the public for the first time in 74 years.

Yoon had called the office a “symbol of absolute power,” and said it would be used as a public park and cultural space.