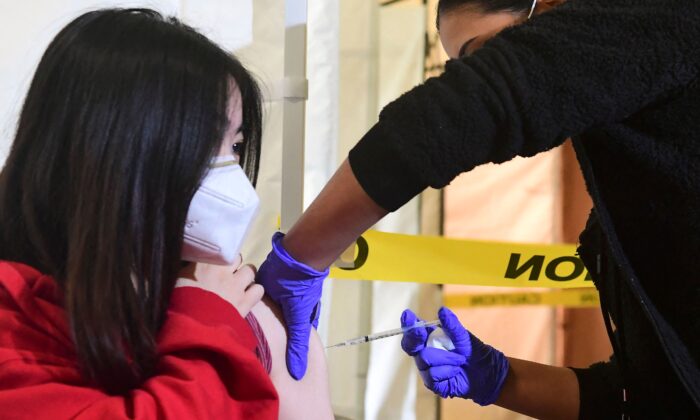 New Bill Would Give California Minors 12 and Older Vaccine Autonomy

SAN FRANCISCO—California lawmakers introduced a bill on Jan. 20 designed to allow children 12 and older to receive any U.S. Food and Drug Administration (FDA) approved vaccination, including the recent COVID-19 vaccine, without parental consent.

The Teens Choose Vaccines Act, or Senate Bill 866, builds on an existing state law that gives autonomy for minors 12 and older to receive both the hepatitis B and Human Papillomavirus vaccine.

“Giving young people the autonomy to receive life-saving vaccines, regardless of their parents’ beliefs or work schedules, is essential for their physical and mental health,” Sen. Scott Wiener (D-San Francisco) said in a statement.

Wiener, who co-authored the bill with eight other Democratic lawmakers, said parents and guardians who refuse to vaccinate their children are keeping them from participating in sports, extracurricular activities, or spending time with friends.

According to the statement, unvaccinated people are approximately 20 times more likely to die from COVID-19 than the fully vaccinated, and about 28 percent of the legislation’s targeted age group, Weiner said, remain unvaccinated since the FDA approved the vaccine for children five and older.

Medical professionals, students, and nonprofits statewide who advocated for Wiener’s proposal called it a step in the right direction for adolescents to learn an assumed responsibility for public health and safety.

Nyla, a 7th-grade student in San Francisco, was quoted in Wiener’s statement, “I can’t think of a good reason why laws shouldn’t let people my age choose to lower our risk of getting really sick. And vaccines not only make us safer, they keep our friends and family safe, too.”

As of Jan. 19, of the more than 77,000 COVID-19 related deaths reported in California since March 2020, 47 were under 17 years old—less than 0.1 percent—according to the state Department of Public Health.

Robert Crane, a California parent who opposes the legislation, said that giving minors the freedom to decide whether to take the COVID-19 vaccine infringes on parental rights and is a step toward allowing the state to enforce vaccinations.

“Most children don’t make decisions adults make because they don’t do all the research that is out there,” Crane told NTD News, sister media outlet of The Epoch Times.

Crane, along with other concerned parents and medical professionals, looks to the Vaccine Adverse Event Reporting System for COVID-19 vaccine-related side effects and deaths.

Over the past two years, according to the reporting system, over 2,100 cases of myocarditis or pericarditis have been reported out of the 529 million COVID-19 vaccines administered.

To date, about 11,500 post-vaccination deaths—0.0022 percent—have been reported to the system, according to the Centers for Disease Control and Prevention (CDC), which stated that “adverse events … following vaccination, including deaths, do not necessarily mean that a vaccine caused a health problem.”

The unveiling of the legislation also comes at a time when a recent CDC study showed that natural immunity—gained through a previous infection—is much stronger against the Delta variant than immunity gained through vaccination.

“This legislation is absolutely bizarre, unconstitutional, and it’s child abuse,” Dr. Masha Rechkunova-Goodson, member of the California Naturopathic Doctors Association, told The Epoch Times. “The vaccine is so new, we won’t know what will happen to them in the future.”

He said that a large contingency of parents would pull their children from California government-funded schools and redirect them toward private education alternatives if the bill passes.

Dacus said that the U.S. Supreme Court has consistently ruled that parents have a fundamental right over their child’s health, education, supply, and welfare over the last century.

“A large part of that right is the ability for them to decide medical and health decisions for their child,” he said. “This legislation is assuming that the masses of California parents are willing to surrender the welfare of their child to the state over a medical vaccine that could be very harmful and dangerous.”

Wiener, co-author of the bill, also mentioned that under California law, children over 12 also have the right to consent access for birth control, abortions, or treatment for sexually transmitted diseases.

Dacus, however, called the comparison “an egregious violation of parental rights” that doesn’t add much credibility to the argument.

If The Teen Choose Vaccines Act passes, it could go into effect early next year. California would then join Oregon, Rhode Island, South Carolina, and Washington, D.C., in allowing children as young as 12 to receive vaccinations without a parent or guardian’s approval.