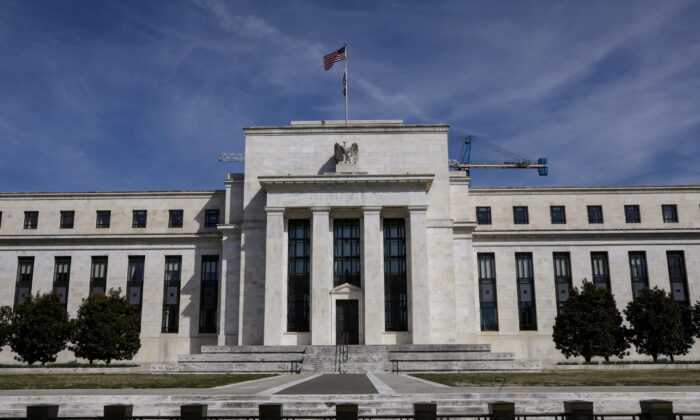 The Federal Reserve Board building on Constitution Avenue, in Washington, on Mar. 27, 2019. (Reuters/Brendan McDermid/File Photo)
Inflation

New Report Says That the Fed May Require 7.5 Percent Unemployment to Lower Inflation

The U.S. unemployment rate may need to rise almost twice its current level in order to control high inflation, according to a team of researchers from the International Monetary Fund (IMF).

The paper, co-authored by IMF economists Daniel Leigh and Prachi Mishra, said that the jobless rate would have to grow from 3.7 percent at the end of August to as high as 7.5 percent to reduce inflation.

Such a number would lead to the loss of about 6 million jobs.

Other researchers estimate that a more modest 5.3 percent unemployment rate would be needed to rein in inflation.

The IMF researchers said that after analyzing the behavior of the U.S. job market and inflation, the conclusion was that the Federal Reserve could not tame current inflation with a smaller cut to employment.

Fed Chairman Jerome Powell reconfirmed, in an interview with the Cato Institute on Sept. 8, that the central bank was dedicated to bringing down the highest inflation rates in 40-years in order to prevent the economic situation from hitting a 1970s’ style crisis.

The Fed chair thinks that this can be achieved without the “very high social costs,” as he and his colleagues aspire to steer the economy into a “soft landing.”

Many economists and critics have disputed over several weeks whether this approach is even possible at this point without causing economic hardship.

Powell did admit some economic “pain” may be required to control the worst U.S. inflation rates since the early 1980s.

He said that he and is colleagues intend to aggressively raise interest rates at the fastest pace since former Fed Chairman Paul Volcker was at the helm of the central bank 40 years ago, but Powell does not think that the Fed’s current policies would result in the same painful outcome as his predecessor.

Volcker dramatically raised interest rates to lower rising consumer prices, which at at one time exceeded as much as 14 percent per year.

However, his policies put the United States into a recession, slowed down the economy, and caused the layoff of millions of workers, leading to an unemployment rate higher than 10 percent.

That, however, eventually led to the economic recovery and boom of the 1980s.

Critical Assessment of an Optimistic Forecast

Former Treasury Secretary Lawrence Summers, during a speech in London, on June 30, had provided a similar figure of 7.5 percent as the IMF researchers, according to Bloomberg.

Last week, Summers again said to Bloomberg that he would be “surprised if we get to the [Fed’s] 2 percent inflation target without an unemployment rate that approaches or exceeds 6 percent.”

Summers said that the Fed’s projections for the path of inflation are “quite optimistic,” despite the strong employment gains seen in recent data from the Department of Labor showing that American employers added 315,000 jobs last month.

The jobs report also included a labor-force participation rate of 62.4 percent, which was higher than had been expected, bringing some hope that tight labor conditions, which contributed to inflation, were easing.

In June, Fed policymakers optimistically predicted that the average unemployment figures would need to rise only to 4.1 percent by the end of 2024 in order to move inflation toward the central bank’s inflation target of 2 percent.

Powell is convinced that things are different from Volcker’s era, as the Personal Consumption Expenditures Index, the Fed’s preferred gauge of inflation, may have already peaked at 6.3 percent.

This has led the Federal Open Market Committee, the Fed’s policy-making arm, to believe that it can overcome inflation without a major rise in unemployment or the U.S. economy falling into a bad recession.

Looking into the Future

August’s consumer price inflation report, which is expected to be released next week, will be the last critical data point that Fed policymakers will use to make their final decision.

The Fed’s updated economic projections, which will be released at its next policy meeting on Sept. 20–21, is likely to show a dimmed outlook by that time, worse than what policymakers had predicted in June.

While reviewing how inflation might behave under different rates of unemployment, the IMF researchers did not rule out the Fed’s current approach altogether.

They wrote that the only thing that strongly brought inflation under control in the past was “a painful and prolonged increase in unemployment.”

The Fed’s plan would only work in the unlikely event that that U.S economy behaves far differently than previously, which some Fed policymakers note may be the case this time.