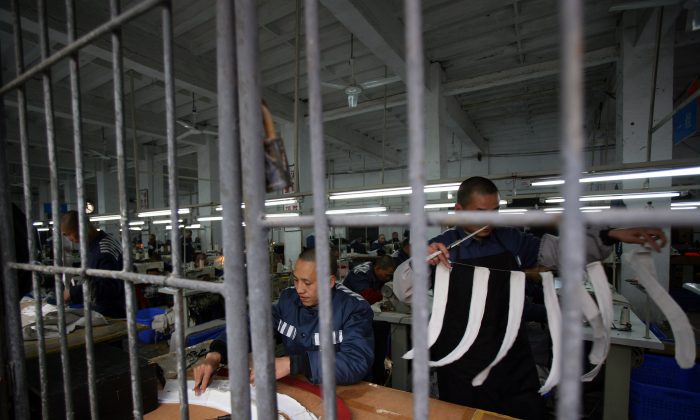 In advertisements for Italian toy brand My Doll on its website, blonde-haired young girls are holding rosy-cheeked dolls with stringy hair and innocent smiles. The image belies the cruel reality of how the dolls were made.

According to a newly published report by the World Organization to Investigate the Persecution of Falun Gong (WOIPFG), My Doll toys were produced by women imprisoned at Shanghai Qingsong Women’s Forced Labor Camp in the early 2000s. Detainees at Shanghai Qingsong included prisoners of conscience who practiced Falun Gong, a spiritual discipline and meditation practice severely suppressed by the Chinese communist regime since 1999, according to the report.

The WOIPFG report details how Chinese detention facilities continue to force its detainees to produce goods for domestic and foreign consumption. However, it is unclear whether My Doll toys are still being made under the conditions described in the report. At press time, My Doll did not respond to The Epoch Times’ request for comments on the report.

Since former Chinese Communist Party leader Jiang Zemin initiated a nationwide campaign to eradicate the practice of Falun Gong, hundreds of thousands of adherents have been detained in the Chinese regime’s labor camps, detention centers, and prisons, according to the human rights group. WOIPFG is a U.S.-based nonprofit dedicated to documenting the abuses suffered by Falun Gong practitioners in China.

The WOIPFG report includes testimony from a Falun Gong practitioner who was sentenced to two years of forced labor at the Shanghai Qingsong labor camp.

Li Ying, who was sentenced for her faith in 2001, said that from June 2002 to May 2003, the third brigade at Shanghai Qingsong was tasked with stitching elements onto the dolls’ clothing, as well as packaging the dolls. The prisoners usually worked from around 7 a.m. to 11 p.m. every day.

“The labor camp’s quotas were calculated based on the workload of 10 hours, but most people wouldn’t be able to meet the quotas,” Li told WOIPFG. “These dolls were stacked on the ground in the labor camp. Some grew moldy in the hot weather. However, since the dolls had clothes put on them, no one could see how dirty their insides were.”

The Chinese regime announced in 2013 that it would shut down such labor camps, claiming it would abolish the “re-education through labor” system it has used to punish dissidents since the 1950s. However, Amnesty International found in December 2013 that in many cases, the changes were merely cosmetic. The facilities would change their names and outside signage, while abuses continued within. In other cases, detainees were simply shuttled to another labor camp or another form of arbitrary detention.

That continues to happen today, according to Wang Zhiyuan, spokesperson for WOIPFG. “Many people were simply placed into prisons instead,” he said in an interview. Over the years, the organization has continually collected reports of Falun Gong practitioners imprisoned in China’s detention facilities being forced to produce goods. “The name [re-education through labor] was canceled, but there is no actual change.”

The WOIPFG report includes detailed information about the labor camps and prisons that have employed prisoners of conscience for slave labor, including the companies that partnered with such facilities, both domestic and foreign; photographs and first-hand illustrations of the products detainees were forced to make; personal accounts from former detainees about their working conditions; and in some cases, photographs of trucks parked in front of prisons, loaded with goods shipments. Much of the information is sourced from Minghui.org, a U.S.-based website that documents and verifies accounts of persecution from Falun Gong practitioners. As recently as March 31, Minghui has reported a practitioner imprisoned in Shayang County, Hubei Province being forced into slave labor.

The report provides a comprehensive picture of the breadth of China’s slave labor economy; it lists over 100 different products from household products to cosmetics and toys that have been sold to countries spanning the United States, Australia, Japan, South Korea, Russia, Germany, Canada, and more. The detainees include Falun Gong practitioners, human rights activists, and other dissidents, ranging in age from 16 to 70.

Wang noted that while the labor camp abuses documented in the report pre-date the Chinese regime’s announcement in 2013, the prisons have not changed their policies and continue to employ slave labor. However, the report does not specify which companies and manufacturers are still involved.

At press time, My Doll did not respond to a request for comment about its supply chains and current and past labor practices in China.

Xinjiang Tianshan Wool Tex Stock Co. is a Chinese joint venture that specializes in producing cashmere and woolen sweaters. According to the report, Tianshan Wool Tex has produced sweaters for a number of international clothing brands, such as Banana Republic and Neiman Marcus. It is unclear whether Tianshan still has a relationship with those brands, though its website clearly states that Tianshan exports to many countries such as the United States, Japan, the UK, Germany, France, Italy, and Canada, among others.

From 2000 to 2002, more than 50 Falun Gong practitioners held at the Changji Labor Camp in Xinjiang were forced to make sweaters for Tianshan Wool Tex. They would work an average of more than 20 hours a day, only taking a short nap at their station. When working, they had to stand to operate the machines. Their legs became swollen from long periods of standing without rest.

If workers fell asleep, the camp guards would shock them with electric batons or order other detainees to beat the workers with bricks and sticks. Detainees who could not complete their assigned work would be handcuffed, stripped naked, and shocked on sensitive parts of the body.

Tianshan Wool Tex also forced detainees to pay for any damaged sweaters, according to the report. Because many could not afford to pay, they instead were punished with extensions to their imprisonment terms.

Due to prolonged exhaustion, sleep deprivation, malnutrition, and no medical care, many detainees fell ill, but were still forced to work. Detainees who were injured from the torture would inadvertently rub off pus and blood onto the sweaters.

At press time, Banana Republic and Neiman Marcus did not respond to requests for comment regarding their relationship with Tianshan Wool Tex and their supply chains in China.

Torture was commonplace at labor camps throughout China, and detainees were seldom protected from hazardous materials they worked with. At Chongqing Women’s Forced Labor Camp in 2010, detainees were forced to wrap candies made by Yaxuan Group. If a Falun Gong practitioner missed her quota, she would be forced to stand or sit upright for two hours every night as punishment.

Detainees at the Yunnan Women’s Labor Camp were in charge of polishing and gluing gems. They had to use limewater to polish the gems, which made their hands swell and the skin break and fester. The fluorescent lighting they worked under for long periods of time left their vision blurry and sensitive to light.

Meanwhile, prisons continue to force their detainees to work, according to WOIPFG. Hangzhou Z-shine industrial Co. is a large clothing manufacturer that exports to many countries around the world. It makes use of over 40,000 prisoners within 38 prisons in China to produce its clothing—a point the company states directly on its website, according to WOIPFG.

In fact, the company openly advertised its use of prisoners for labor in an advertisement seeking investors. For business owners without the capacity to fill large orders themselves, “you can work with the prison system’s garment factories and assign the large orders to us. We will be able to complete your orders with low processing fees, high quality products, and high efficiency!” the advertisement reads.