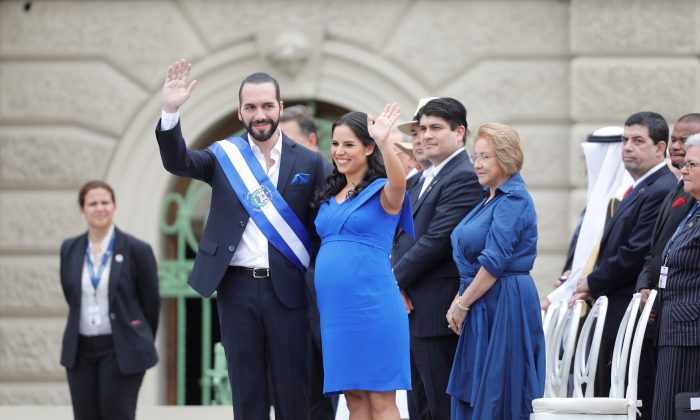 SAN SALVADOR—El Salvador’s new president, Nayib Bukele, took office on Saturday pledging to cure the Central American country that he described as a “sick child” following years of violence and emigration that has strained relations with the United States.

The 37-year-old former mayor of San Salvador, who won more votes than all other candidates in the February presidential election, brought an end to a two-party system that has held sway over the country for three decades.

“I will be the president of all Salvadorans,” Bukele pledged.

“Our country is like a sick child, now it’s up to all of us to take care of it,” Bukele told the crowd. “We have to suffer a little now, we have to have a little pain, assume our responsibility and all as brothers to bring forward that child.”

Accompanied by his pregnant wife Gabriela Rodriguez, Bukele vowed to make the tough decisions for the impoverished and violence-plagued Central American country during his five-year term.

The country swooned watching Bukele caress Gabriela gently on the face after she was slightly startled by planes flying overhead as her husband was sworn in at Capitán General Gerardo Barrios Square in front of the National Palace in downtown San Salvador.

Bukele, a businessman, is the son of a Palestinian imam and a Christian who previously described himself as a believer in God rather than a follower of any particular religion.

Bukele has said he will seek closer ties with the United States; a country that almost a third of 6.6 million Salvadorans now call home after fleeing El Salvador’s rampant gang violence and debilitating poverty. This will be a policy u-turn from his predecessor, the former leftist guerrilla Salvador Sánchez Cerén, who had closer relations with his socialist counterparts in Venezuela and Nicaragua.

Bukele has also been critical of Beijing in the past. He has said he will revisit Sánchez Cerén’s 2018 decision to break diplomatic relations with Taiwan to establish relations with the Chinese Communist Party, following the Dominican Republic and Panama in the region.

The Chinese embassy in El Salvador said in a statement on Twitter that Bukele told a special envoy he considers China a friend and that there was “great potential” to work together.

U.S. President Donald Trump congratulated Bukele on Saturday on Twitter, saying the United States was ready to work with him “to advance prosperity in El Salvador and the hemisphere.”

The United States stands ready to work with @NayibBukele to advance prosperity in El Salvador and the hemisphere. Congratulations President Bukele on your inauguration!

Trump has frequently asked for El Salvador—as well as neighboring Guatemala and Honduras—to do more to curb emigration to the United States.

The U.S. Department of Commerce said in a statement that the United States sent a delegation led by U.S. Secretary of Commerce Wilbur Ross to attend the ceremony.

The U.S. remains committed to our relationship with #ElSalvador, and to exploring new ways to fuel economic growth and investment to benefit Salvadorans across the country. pic.twitter.com/cQW8BggwpW

While in El Salvador, the statement said, Ross met with Bukele and his Foreign Minister, Alexandra Hill, as well as with business leaders to discuss improving the investment climate and potential for economic growth.

In one of his first actions as president, Bukele ordered for the Salvadoran Third Brigade Barracks in San Miguel to withdraw the name of Pentagon-backed Colonel Domingo Monterrosa, who is accused as one of those responsible for the 1981 counterinsurgency and massacre at El Mozote in which more than 800 civilians were killed.

President of El Salvador orders name of Lt. Col. Domingo Monterrosa removed from Third Brigade Barracks in San Miguel. Monterrosa was the most controversial figure of the 12-year civil war. Darling of U.S. advisors, accused of presiding over the infamous massacre at El Mozote. pic.twitter.com/VWag084G8z

By Paula Rosales. With additional reporting by Epoch Times staff.