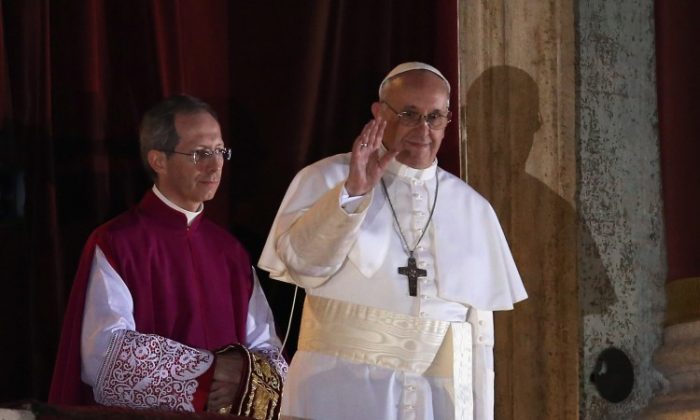 Pope Francis I, the first pope from South America, addressed the crowd in St. Peter’s Square Wednesday night. Jorge Mario Bergoglio, Archbishop of Buenos Aires, was chosen by the Conclave of 115 cardinals.

Jorge Bergoglio Archbishop of Buenos Aires is the first South American pope and also the first pope to choose the name Francis.

Bergoglio is believed to have finished second to Joseph Ratzinger when Ratzinger was elected Pope Benedict XVI by the Conclave eight years ago. Nonetheless, he was not among the front-runners discussed in the media this time around.

Pope Benedict XVI resigned, citing health and age; he was 78 when he became pope, only two years older than Bergoglio is now.

Pope Francis I addressed a crowd of thousands from the balcony of St. Peter’s Basilica. He held a moment of silence before he began to speak.

He spoke of the journey of the Church.

“It is a journey of love, of trust, of faith … I wish that this journey for the Church that we will start today—and my vicar cardinal is going to help me—lets hope this journey bears fruit for the evangelizing of this beautiful city.”

He prayed with the crowd for former Pope Benedict XVI.

A Latin-American woman living in Italy expressed her excitement to CNN, noting that Italy does not have a government, but the Church has chosen a pope in two days.

Pope Francis I was ordained in the Jesuit order in 1969—and to add to his firsts, he is now also the first Jesuit Pope. St. Francis Xavier is the saint of the Jesuit order.

“Everybody will remember this name,” Alessandro Rivero, a Latino seminary student, told CNN. No pope has ever chosen the name Francis—St. Francis of Assisi’s humble nature and purity of spirit has been held in great reverence among Catholics. It is possible he had both St. Francis of Assisi and St. Francis Xavier in mind when choosing a name.

“It’s a great lesson for us [in Latin America], a great movement in the Church … I am very happy because he [speaks] my own language,” Rivero said. Rivero feels the language is a bridge.

Pope Francis I is Argentinian, but he also has Italian roots. He grew up in Buenos Aires, but is of Italian heritage.

He is being hailed as a humble man of the people, one who takes the bus to work, cooks his own food, lives in humble quarters—a simplicity rare in his level of office. He has washed the feet of the sick in Buenos Aires, a sign of humility in the Catholic faith modeled after Jesus who washed the feet of the poor.

Of the 115 cardinals in the Conclave, he must have won at least 77 votes to become pope.