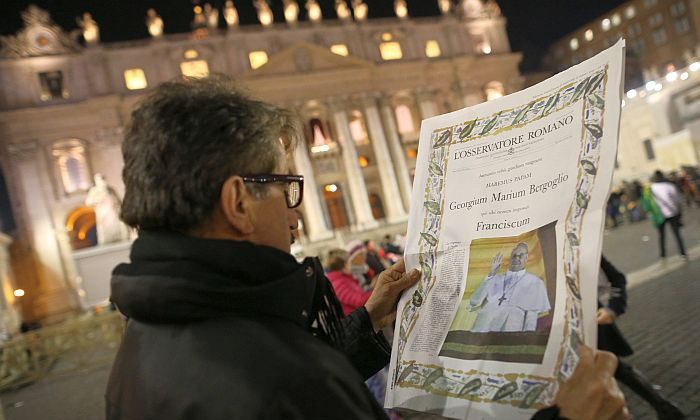 A man reads a special edition of the L'Osservatore Romano newspaper which carries a photo of newly elected Pope Francis I in Vatican City on March 13. (Peter Macdiarmid/Getty Images)
International

Jorge Bergoglio, the archbishop of Buenos Aires, Argentina, is now Pope Francis—the first pope to take the name of Francis, the first Jesuit pope, the first South American pope, and an unexpected choice.

With 40 percent of the world’s 1.2 billion Catholics living in South America, some say it is time for a Latino pope.

“Our hope is that this Pope will bring great changes not only in Rome but also in the world, and especially in South America, where there are many poor and suffering people. Why, to this day, the Pope was around here, here in Europe, and nothing changed. I hope that this Pope is very strong and innovative,” said Brazilian Manuel Tabarez in St. Peter’s Square following the pope’s address.

Pope Francis is Argentine by birth, but Italian by heritage.

He is being hailed as a humble man of the people, one who takes the bus to work, cooks his own food, and lives in humble quarters.

Pope Francis exhibits a simplicity rare in his level of office, especially for one who has come so close to the office of pope before.

He is believed to have finished second to Joseph Ratzinger when Ratzinger was elected Pope Benedict XVI eight years ago. Nonetheless, he was not among the front-runners discussed in the media this time around.

Priest Oscar Sanchez, from Ecuador said, “None of us thought he would become pope, thinking that his moment was past. We hoped [it would] be someone Latin American, because we are from there. So, we are indeed very happy with this choice.”

Pope Benedict XVI resigned, citing health and age; he was 78 when he became pope, only two years older than Pope Francis is now.

Of the 115 cardinals in the conclave, he must have won at least 77 votes to become pope. In recent history, it has usually taken about seven ballots to elect a pope, but Pope Francis was elected after five, perhaps signaling a high approval rate among the cardinals.

Analysts and the faithful called him “charismatic” on Wednesday.

He addressed a crowd of thousands from the balcony of St. Peter’s Basilica. He spoke of the journey of the Church.

“It is a journey of love, of trust, of faith. … I wish that this journey for the Church that we will start today—and my cardinal vicar is going to help me—let’s hope this journey bears fruit for the evangelizing of this beautiful city,” Pope Francis said.

Pope Francis was seen as moderate during his time as a Jesuit leader in Buenos Aires. He has had some disagreements with the Argentine government, however, for his more conservative views.

Many now wait and wonder what this pope of many firsts, of traditionalist views, and of humility will bring to the world.