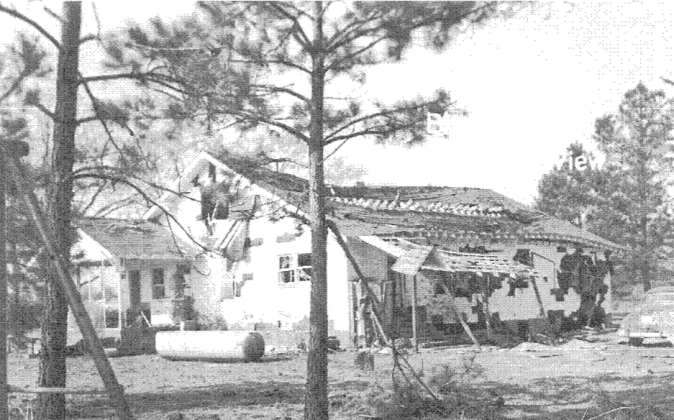 These March 11, 1958, Mars Bluff Incident photos were released back in 2012 due to a Freedom of Information Act request by Carlton Purvis. (FOIA records)
Photo Gallery

On a remote piece of land just outside of Florence, S.C.,  an atomic weapon was accidentally dropped on March 11, 1958.

Known as the “Mars Bluff Incident,” a sign on Crater Road acknowledges the accident, stating, “The bomb landed in the woods behind the asbestos-shingle sided home of a railroad conductor, Walter “Bill” Gregg. Gregg, his wife, their three children, and a niece were injured by the concussion, which destroyed the house and out-buildings and did slight damage to buildings within a 5-mile radius.”

Related Coverage
B-52 Stratofortress Catches on Fire, Crashes in Guam

At the time, Air Force officials stated that the bomb had not been armed with its nuclear payload, thus producing no catastrophic ‘atomic bomb’ type effects. Its nuclear core had been kept separate from the device that fell in a storage case known as “the bird cage.”

New photos of the site after the explosion have been released after a 2012 Freedom of Information Act (FOIA) request by Carlton Purvis, who made public some Air Force photos from its investigation.