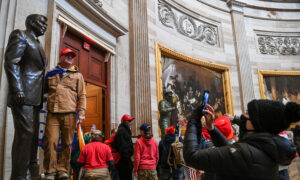 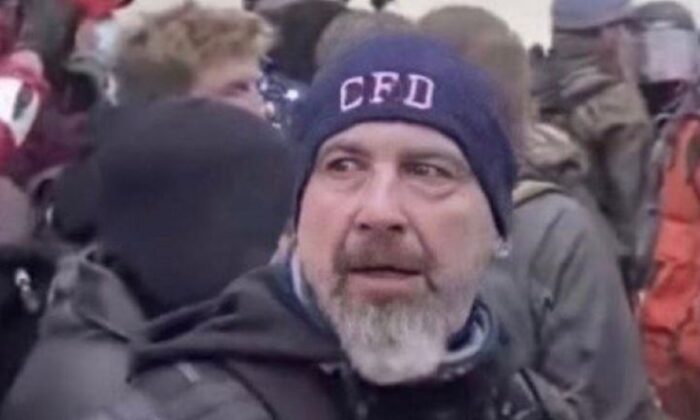 A person of interest in the Jan. 6 Storming of the Capitol Building is seen on Jan. 6, 2020. (U.S. Capitol Police via Sen. Bill Cassidy)
Crime and Incidents

New Photograph Shows Person of Interest in Jan. 6 Storming of the Capitol Building

A newly released picture shows a person of interest wanted for questioning regarding the Jan. 6 storming of the Capitol building.

“U.S. Capitol Police just shared this picture with me. This man is wanted for questioning in connection with the murder” of Capitol Police Officer BrianSicknick, Sen. Bill Cassidy (R-La.) said Tuesday on Twitter.

The photograph showed an older man with a grey beard, wearing a blue knit cap emblazoned with the letters “CFD.” He was wearing a checkered coat and carrying a backpack.

A second picture showed the man was wearing camouflaged pants and what appeared to be black shoes.

Two U.S. officials, Reps. Bill Pascrell Jr. (D-N.J.) and Pete Olson (R-Texas) quickly circulated the pictures on social media, urging people to contact the authorities if they recognized him. People were asked to call the FBI.

Sicknick, 42, died on Jan. 7 after being injured “while physically engaging with protesters” at the Capitol, the USCP said in a statement.

“He returned to this division office and collapsed,” the department said. “He was taken to a local hospital where he succumbed to his injuries.”

The death is being investigated as a homicide.

Legislators with both parties have condemned the death and called for the prosecution of the person or people responsible.

Sicknick’s family called on people not to politicize the death and mentioned how Sicknick wanted to be an officer his whole life.

Correction: The article has been updated to show that the wanted individual is not tied to the death of officer Sicknick.