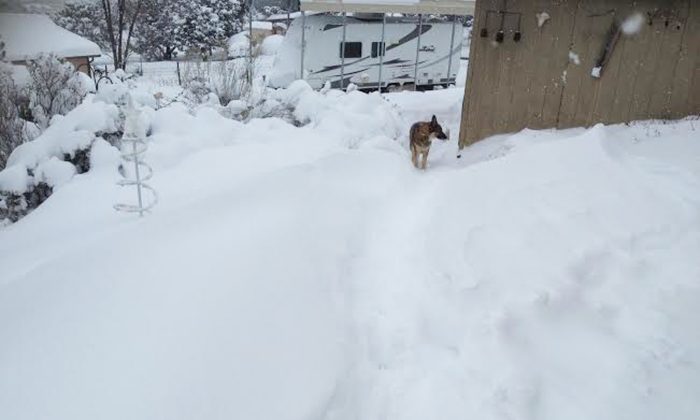 In this photo provided by Kim Serrano, a pet German Shepherd walks in a neighborhood blanketed in snow in Edgewood, N.M., Sunday, Dec. 27, 2015. New Mexico's governor declared a State of Emergency on Sunday as residents dealt with the fallout of a crippling snowstorm. (Kim Serrano via AP)
News

By Daniel He
Print

As of Jan. 1, a new law passed in Illinois takes effect protecting cats and dogs left outside in extreme hot or cold conditions. Pet owners will now be fined up to $2,500 or face up to one year in jail if charged with the Class A misdemeanor.

Signed by Gov. Bruce Rauner last fall, the offense punishes owners whose pets end up injured or die due to being left outside exposed to harsh elements.

In terms of other forms of abuse, animal neglect is already considered a misdemeanor in all 50 states and Washington, D.C.; in Massachusetts and Oklahoma, abuse can even be a felony. Felony charges can also be applied in California, Connecticut, Florida and Washington, D.C. if the animal dies due to neglect.

Veterinarians have praised the new law, but one vet, Dr. Kristy Hook told WQAD that she would like to see a even stricter law in place. Hooks says that pets can quickly get frostbite just from spending 20 minutes out in the cold.

When taking pets for a walk, walks should be short and owners should make sure their animals don’t have any snow or ice stuck in their paws when going back into the house. Hook believes that owners should be required to seek medical attention if pets are out in the cold for too long.

The Humane Society advises that for pets which spend a lot of time outdoors, owners should feed them more in the winter since simply keeping warm requires more energy. The Society also recommends using plastic food and water bowls to prevent your pet’s tongue from sticking to frozen metal.

The Illinois law came about after many pets died from being left outside in freezing conditions last winter, according to WGNTV.

Just last month, there was a video uploaded to Facebook showing two old dogs freezing and howling outside during Winter Storm Jonas.