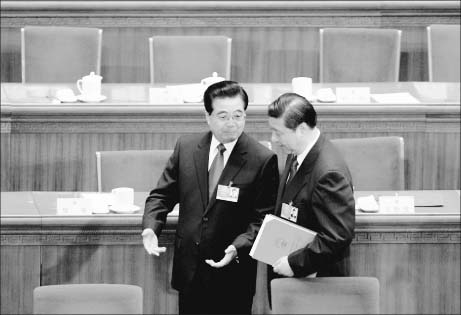 New Party Leadership Moves in on Strongholds of Old Faction

Chinese Party head Xi Jinping and outgoing state leader Hu Jintao have been hard at work repositioning key officials to solidify their faction’s power base, while curtailing the influence of former regime leader Jiang Zemin and his camp.

Only during the last year was Hu Jintao able to emerge from the shadow of Jiang Zemin, largely due to the political turmoil caused by the Bo Xilai scandal that began last February. At present, the Hu-Xi faction has full control of the military, with Jiang supporters having been ousted from the core of China’s armed forces prior to the 18th Congress last November.

Since then, Hu and Xi have appointed their own trusted men into key positions in the Party’s Central Committee, State Council and provincial committees, leaving the Jiang faction with the majority in the Politburo Standing Committee, the chief power organ in China.

But while the Jiang faction is holding four of the seven positions in the Standing Committee, in reality they are also trapped there. The sprinkling of positions arranged for Jiang’s followers at lower levels are nothing more than a safeguard to keep the faction from initiating a life-and-death struggle at this time.

The Hu-Xi personnel arrangements have been carried out in four waves, starting with the army—the Party still follows the Maoist dictum that power comes from the barrel of a gun.

The second wave of the reshuffle has been in the Politburo of the Central Committee.

Among the seven Standing Committee members, the status of Li Keqiang, Wen Jiabao’s successor, has been elevated to second place, and Wang Qishan, the Party’s new anti-corruption boss, has been drawing closer to Xi Jinping.

The third wave of personnel rearrangements has targeted the heads of provincial Communist Party committees.

Adjustments in 11 provinces, autonomous regions, and municipalities directly under Party Central resulted in seven high-ranking officials with a background in the Youth League, Hu’s political base, being appointed Party heads. These are: Sun Chunlan for Tianjin Municipality, Wang Rulin for Jilin Province, Zhao Zhengyong for Shanxi Province, Xia Baolong for Zhejiang Province, You Quan for Fujian Province, Hu Chunhua for Guangdong Province, and Peng Qinghua for Guangxi Province.

The fourth wave of the Hu-Xi personnel arrangements has not yet taken place, but can be expected during the convening of the National People’s Congress and People’s Political Consultative Conference in Beijing in March.

By that time the personnel adjustment for the State Council will be completed. Followers of the Hu-Xi camp, including Wang Yang and Li Yuanchao who have not been able to get a seat on the Politburo Standing Committee, will have a chance to secure key positions in the administration, to complement their existing Party appointments. The containment of the Jiang faction will thus be completed.

During the past decade, the Jiang Zemin faction used to have three strongholds: the People’s Liberation Army General Staff Department, the Political and Legislative Affairs Committee (PLAC), and the city of Shanghai. These all collapsed around the CCP’s 18th Congress.

The People’s Liberation Army General Staff Department was taken over by Hu Jintao’s “star general” Fang Fenghui prior to the 18th Congress.

Holding the Chief of Staff position, Fang Fenghui has taken hold of military power to mobilize the army and command battles. At the same time, he cleared the Jiang faction stronghold in the army by controlling Chinese Communist Party’s (CCP’s) two biggest intelligence departments, known as the First and Second General Staff Departments.

The PLAC, which oversees the Party’s massive public security apparatus, has had its power checked after last year’s attempted coup by its former head Zhou Yongkang and disgraced former Politburo member Bo Xilai. Jiang Zemin’s placement of Zhou Yongkang at the top of the PLAC and into the Politburo Standing Committee had prior to last year severely restricted and weakened the Hu-Wen leadership.

The PLAC controls the CCP’s entire judicial system, being in charge of the police, armed police, procuratorate, and courts. With the retirement of Zhou Yongkang, and the removal of the head of the PLAC from the Standing Committee, the Jiang faction has lost its PLAC lair.

Jiang Zemin’s bastion, Shanghai, has fallen too. The new Shanghai Party Secretary, Han Zheng, broke away from the Jiang faction as early as 2006 when he provided the Central Commission for Discipline Inspection a great amount of evidence against Jiang’s deputies, Huang Ju and Chen Liangyu.

The promotion of Jiang’s henchman, Yang Xiong, as Shanghai’s acting mayor came directly from the Central Committee, not from the Shanghai Municipal Party Committee. Since the Jiang faction lost all its strongholds, Hu and Xi left this nominal position in Shanghai to stabilize the Jiang faction and keep them from starting a life-and-death struggle before Xi has established a firm foothold.