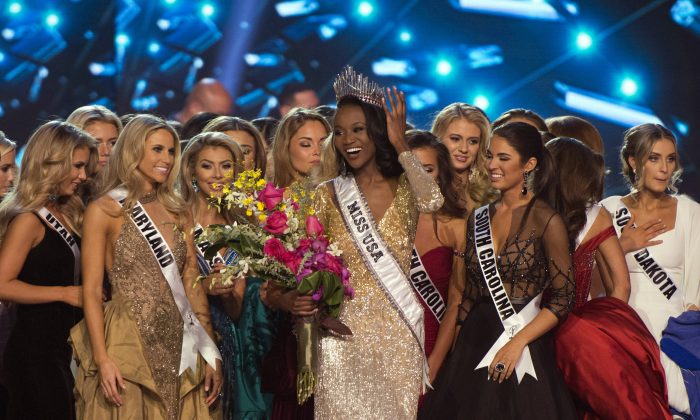 A 26-year-old Army officer from the District of Columbia of Fayetteville is the winner of Sunday’s 2016 Miss USA competition that was held at the T-Mobile Arena off the Las Vegas Strip.

Deshauna Barber wowed everyone with her answer when she was asked by judge Joe Zee about women in combat.

“As a woman in the United States Army, I think it was an amazing job by our government to allow women to integrate into every branch of the military.”

She continued: “We are just as tough as men. As a commander of my unit, I’m powerful, I am dedicated and it is important that we recognize that gender does not limit us in the United States.”

From the District of Columbia, #MissUSA 2016 Deshauna Barber!

This Queen belongs in the White House. pic.twitter.com/4WrvAM5eSl

Barber, who is the daughter of a retired Army master sergeant, made history by being the first military member to win Miss USA.

According to Barber’s bio on the pageant’s website, she was commissioned as a quartermaster officer in 2011 and serves as a logistics commander for the 988th Quartermaster Detachment Unit at Fort Meade, Maryland. She also works full-time as an IT analyst for the U.S. Department of Commerce, the website said.

In a press conference following Sunday’s event, Barber said she is not going to return to the Army Reserves anytime soon, and had already discussed with superiors prior to her win regarding her possible inactivity should she win the title. She said she currently serves two days per month.

“My commander should be watching right now,” Barber said. “Two days a month is definitely not active duty. It is an obligation that I signed up for but they are very flexible in the United States Army Reserves.”

The lieutenant from Northeast DC is set to compete in the Miss Universe contest.