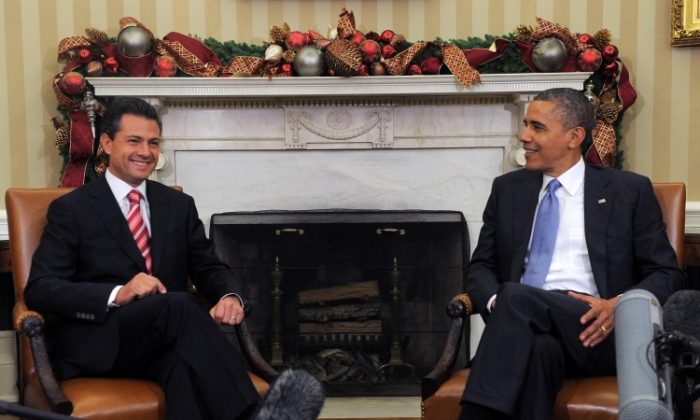 Peña Nieto’s approach suggests it is time to leave behind Mexico’s image of a land dominated by violence and drug cartels, and project a more positive image.

“You have got to admire Mexico’s leadership for wanting to turn that around and do what it takes to show a different side of the country,” says Stephen Johnson, director of the Americas Program for the Washington based Center for Strategic and International Studies (CSIS).

Peña Nieto, who will be inaugurated Saturday, Dec. 1, replaces Calderón whose six-year term was consumed with a war on drugs—a campaign that resulted in a litany of grisly newspaper headlines and a death toll of over 60,000.

A former governor of the state of Mexico, Peña Nieto was careful not to be too explicit about his program of reforms other than to differentiate his approach to that of Calderón’s and focus on the economy and jobs.

The new president is projecting a reformed image for his party as well as for the nation. Peña Nieto is a member of the Institutional Revolutionary Party, known as PRI, a formerly repressive and allegedly corrupt party that ruled for over 70 years until it lost the presidential election in 2000.

Peña Nieto is the first president who has come of age professionally in a democratic Mexico and the first PRI president not to gain the position by sham elections, says Jorge Castaneda, a former foreign minister for Mexico.

Even more encouraging is his willingness to work with opposition parties, including Calderón’s National Action Party (PAN), says Castaneda. PAN, PRI, and the New Alliance Party garnered a combined 70 percent of the vote in the recent election and have made a written agreement on a range of significant reforms, including establishing a national corruption commission; opening up the state-owned oil company, Pemex, to private investment; and encouraging public-private partnerships for infrastructure investment.

“There could be lots of disagreements between the parties, but … there is at least some framework there that has been negotiated,” Castaneda said on a press call this week with the Council of Foreign Relations, a nonpartisan think tank.

Mexico, with a population of about 113 million, is one of the world’s largest economies. It is the U.S.’s third largest trading partner.

It also engages widely in the global market through 12 international trade agreements. With a strong manufacturing basis, it showed resilience during the recession. Its middle class now encompasses about half of its population.

Mexico “would like to be known as an emerging middle-income country and as an emerging economic power, but that wasn’t necessarily the picture being painted by Calderón,” Johnson said.

Peña Nieto is not ignoring the drug problem but wants to focus more on the violence. Johnson says incidences of violence are isolated and have been going down, the level of homicide in Mexico also not as bad as in other Latin American countries, like Venezuela, and El Salvador.

Still Mexican drug cartels have dominated the illicit drug market in recent years, controlling 90 percent of the drugs that enter the United States, according to a 2007 report from the Congressional Research Service.  Calderón may not be seen in a positive light now but he was courageous in tackling drug cartels, Johnson said.

The new Mexican president has proposed reorganizing security forces and has appointed a former Colombian police chief as security adviser.

While there remains more work to be done, particularly in the justice system and police forces at state and local level, a willingness to focus on broader issues and strategies is a positive says Johnson.

Mexico has a lot to offer in terms of tourism, with the more violent areas far from tourist attractions, and economically there is great potential. It is likely we will hear more about these aspects under the new administration.