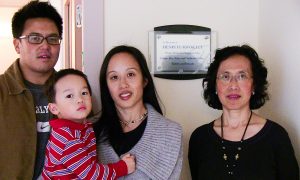 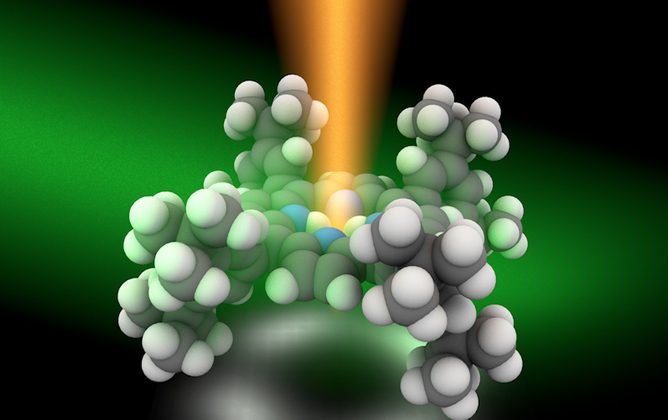 Artist illustration of how single molecules can be analysed. (Guoyan Wang and Yan Liang)
Science

New Method Can Image Single Molecules and Identify Its Atoms

The ultimate dream of nanotechnology is to be able to manipulate matter atom by atom. To do that, we first need to know what they look like. In what could be a major step in that direction, researchers have developed a method that can determine the shape of a single molecule and identify its constituent atoms.

The laws of nature limit what can be seen with the help of light alone. Only objects separated by more than half the wavelength of the light that illuminates it can be observed as separate objects. To overcome this limit, in 1928, Edward Hutchinson Synge came up with an idea of imaging things too small for the naked eye. The idea was to shine light on a small particle and study the scattering when reflected back, making the wavelength of incident light irrelevant.

The realisation of Synge’s idea had to wait till the 1980s, when Heinrich Rohrer, the father of nanotechnology, developed scanning tunnelling microscopy (STM). This method uses a special property of electric current called quantum tunnelling to achieve this.

Since the development of STM, techniques for imaging smaller and smaller objects have been improving incrementally. Today it is possible to identify the shapes of molecules and where the atoms reside. But none of these techniques can identify the atoms those molecules are made of.

Now researchers from China, Spain and Sweden have combined STM with another method called Raman spectroscopy to determine not just the shape, but also the constituent atoms of a single molecule.

Left: Experimental map of the ring-shaped molecule. Right: Theoretical fingerprint of the molecule based on calculations. (Guoyan Wang and Yan Liang)

When some form of energy, like heat or light, hits molecules it makes them vibrate and rotate, even in solid structures. This process is called “excitation”. The movement emits some of the energy back, which is called “emmission”. Raman spectroscopy works by detecting this tiny amount of emitted energy, which tells us things about the molecule that’s doing the emitting.

One of the many uses for Raman spectroscopy is analysing old ruined paintings. It can detect the presence of certain elements at very specific locations. The salts of these elements have specific colours and thus they can reveal what a particular part of the painting might have looked like originally.

Analyzing trillions of molecules is easy, because molecules of the same type will combine to produce a more intense signal, since they all experience the same vibrations and rotations. Where things become tricky is when single molecules need to be excited and their weak energy emission measured. Researchers led by Jianguo Hou, at the University of Science and Technology of China, have found a way to do that. The results of their work are published in the journal Nature today.

They use a modified STM technique that produces just enough light to excite only a few atoms of a molecule at a time. A laser is focused in a metal cavity which contains the molecule to be analysed. The laser’s energy creates an excited cloud of electrons called plasmons, which creates the local energy needed to excite different parts of a single molecule.

The image to the left is a pictorial representation of the process. Based on theoretical calculations by co-author Javier Aizpurua at the Center for Material Physics in Spain, the energy pattern received at the atomic level, called its Raman spectra, can be analysed to reveal the chemical structure of the molecule.

The researchers claim that the method could be applied to any molecule. The trouble is that extreme conditions of high vacuum and low temperature (-200 deg C) are required to carry out this analysis. “At present this is very much a lab experiment,” Aizpurua said. The setup also require weeks to months of work just to be able to analyse a single molecule, and their paper reports work done with only one ring-shaped molecule.

Prabhat Verma at Osaka University has worked on using Raman spectroscopy to analyse materials at the nanoscale. He was sceptical of the results, “This article claims a spatial resolution of better than 1 nanometer (billionths of a meter), without giving any explanation of how.” Aizpurua and Hou have some theories about it, but are yet to nail down an explanation why they are able to get such high resolution.