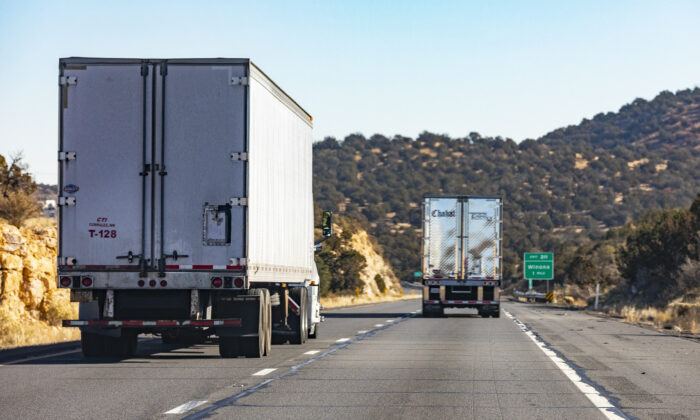 Louisiana has enacted a law that will allow big-rig trucks to haul tandem loads as a way to boost the volume of shipments amid a growing shortage of drivers.

A recent study by the American Trucking Associations found that the nationwide shortage could top 160,000 drivers by 2030, after setting a historic shortage of 80,000 drivers in 2021.

“I’m told there is a substantial shortage of drivers according to representatives of the industry here in [Louisiana],” said state Sen. Gary Smith, who introduced the bill.

Louisiana Gov. John Bel Edwards, a Democrat, signed the bill into law on June 17 after it was approved by both chambers of Louisiana’s Legislature.

The new law also aims to reduce the number of containers delayed at shipping facilities in Louisiana, using fewer trucks to haul them.

“Then, there is the reduction of emissions and stress of another independent vehicle in traffic with lower impact on the environment. Overall, this is a win for the shipping industry in Louisiana,” Smith told The Epoch Times.

Before negotiations, the Lousiana Department of Transportation and Development (DOTD) voiced concern over the potentially damaging effect of heavier tandem containers on roads.

The bill contains a sunset provision that will help the DOTD work with and monitor the use of tandem rigs, Smith said.

“The industry was aware of the negotiations with the DOTD on this aspect and believed it will prove itself in the long run. I do not agree with the department’s opinion and, in fact, believe the very opposite,” he said.

“The way this is set up with the distribution of weight over 10 axles and the reduction of a tractor makes this less weight on the road than two independent units consisting of a tractor and a trailer.”

The LDOT will only be responsible for issuing annual permits for state-maintained roads. Interstate highways are federally regulated.

In Arizona, Tony Bradley, president and CEO of the Arizona Trucking Association, said the state permits only two standard types of commercial freight hauler configurations in most situations. These include a cab-over truck and a 53-foot trailer in tow, or a truck pulling two 28-foot trailers linked together.

He said that the latter configuration is known as a “twin-28,” which is allowed on only a few designated roads in Arizona.

“Arizona generally doesn’t allow longer combination vehicles except for a few routes that come in and out of [Utah and Nevada], and only for a few miles,” Bradley said.

The weight limit is 80,000 pounds for tandem loads.

“In general concept, [tandem loads] has been discussed. Other states have their own [rules] to allow longer combinations of vehicles and their justifications and reasons for doing so,” Bradley told The Epoch Times.

“Arizona doesn’t allow them, except for those few exceptions.”

Bradley said double 28-foot trailer combinations are common among freight haulers such as FedEx, UPS, and XPOLogistics in states that allow them.

While the American Automobile Association doesn’t monitor trucking activity, the agency cautions motorists to be watchful when sharing the road with commercial haulers.

AAA spokesman Andrew Gross said it’s important to “be very mindful of trucks and assume that the truck can’t see you, and you should see them.”

“With a truck hauling three trailers, you’d want to be triple observant of their blind spot. Give them a wide berth,” Gross told The Epoch Times. “With any good driver, you must keep your eye out for everything.”

“You see them because companies utilize the efficiency gains [in fuel savings and carrying capacity], and they have for a long time. Other companies are trying to get into this a little bit more. You can move more goods with different configurations than with a standard tractor configuration, which is about 72 feet.”

However, Kelly said the challenge for tandem loads is staying under the 80,000-pound standard weight limit.

“One big truck going from business to business weighs out quickly,” he said. “With us, it’s the exact opposite. We’re carrying a lot of different packages, which are lighter in weight. We can utilize this type of technology to gain efficiencies.”

Kelly said other companies are looking to move more products with fewer drivers in light of the driver shortage and supply chain issues.

“If they can utilize it without going overweight, I think they will utilize these different configurations [more],” he said.

In January, the Federal Motor Carrier Safety Administration announced a new apprenticeship driver program for 18- to 20-year-olds that would allow them to cross state lines.